Modi’s new outreach to Africa promises to be transformative

Mr Modi deserves to be applauded for his clearheaded, proactive and transformative outreach to Africa. 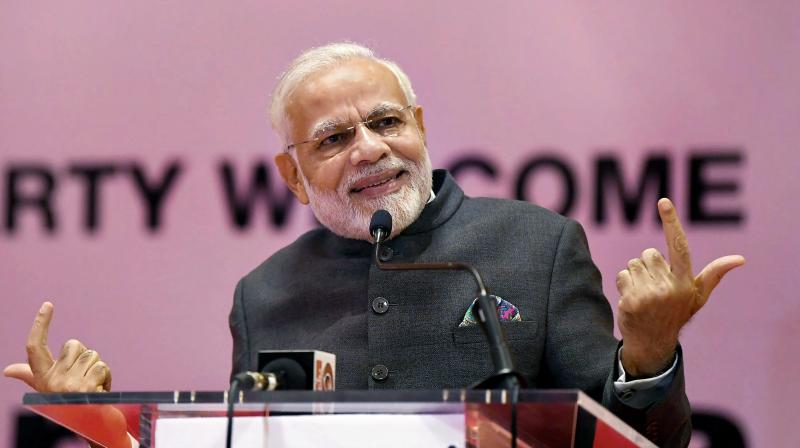 While India’s relationship with its immediate neighbours — in spite of Prime Minister Narendra Modi’s “neighbours first” policy — has seen mixed results, our relations with Bangladesh and Sri Lanka have improved. But relations with the Maldives, Nepal and Pakistan have worsened. However, Mr Modi deserves to be applauded for his clearheaded, proactive and transformative outreach to Africa.

India’s historical, cultural and trade links with the African continent go back centuries. Mahatma Gandhi, Jawaharlal Nehru and Indira Gandhi are still remembered fondly in many countries for their inspirational anti-imperialist, anti-colonial and anti-apartheid crusade. Africans also appreciate the Indian government’s scholarships to African students under the Indian Technical and Economic Cooperation (ITEC) programme and its decision to set up IT centres, pan-African E-network and assistance to combat HIV and AIDS.

But obviously India didn’t take full advantage of prevailing favourable factors to their full potential. Top Indian leaders visited some African countries but these visits were few and far between, and several countries didn’t see any Indian leader for decades. Similarly, the bilateral visits by African countries to India were also few, the enthusiasm for receiving African leaders was shallow if not outright negative. In many African capitals we heard the same refrain — India remembers us only when it needs our vote for its candidate’s election to the UN agencies.

Fortunately, this mindset has changed. There is a visible paradigm shift. The third India-Africa Forum Summit in October 2015, which saw representation from 54 African countries, in 43 cases at the level of the head of state/government, was a watershed. In the last four and a half years, India’s President, vice-president and PM have visited 25 African countries and 32 heads of states and government from Africa have visited India. Indian companies have invested $54 billion and India’s trade with Africa has risen to $74 billion.

During Mr Modi’s recent successful visit to Rwanda and Uganda, a slew of agreements were signed, credit lines and soft loans of around $200 million each were extended. Mr Modi became the first Indian PM to visit Rwanda, which is becoming a fast-growing economy and offers opportunities for trade and investment in agriculture, food processing, infrastructure, education and healthcare. Gifting 200 locally sourced cows to support Paul Kagame’s flagship Girinka programme was a smart, innovative, low-cost high-return diplomatic move.

Mr Modi, the first PM of India to visit Uganda in the last 22 years and the first to address the Ugandan Parliament, assured that India would continue to support Uganda in the fields of agriculture, healthcare, education, training, infrastructure, energy, capacity building in government and training in defence and referred to India’s ongoing partnership with Africa “including implementation of 180 credit lines worth $11 billion in over 40 countries”. He announced the setting of a Gandhi heritage centre in Jinja. His enunciation of 10 basic principles that will guide India-Africa relations will have a positive impact:

Mr Modi’s speech at the 10th Brics summit held in Johannesburg on July 25-27 was partly a reiteration of his speeches at the World Economic Forum and the Ugandan Parliament recently. His views about globalisation, open markets, multi-polar world and rule-based international trading system similar to the views of the Chinese President have found place in the joint declaration. His stress on new technologies, education, skill upgradation and human values has found wider resonance.

Brics, which initially focused on financial, economic, trade and investment-related issues, now devotes as much time on regional and global strategic issues. It associates many non-Brics countries as cooperative partners. At Fortaleza, Brazil invited regional economies; at Ufa, Russia invited Eurasian economies; India invited the Bimstec members in Goa; China invited five major developing economies from around the world and South Africa invited as many as 22 countries from Africa as well as Argentina, Egypt, Indonesia and Turkey. It looked like a mini UN.

Johannesburg declaration’s commitment to “foster a more representative, democratic, equitable, fair and just international political and economic order” uphold “multilateralism” respect “international law, promote democracy and Sustainable Development Goals” is unexceptional. It “reaffirms the need for a comprehensive reform of the UN, including the UNSC”; China and Russia reiterated their support to the aspirations of India, Brazil and South Africa to play greater role in the UN; it is far from a strong and clear endorsement. Their reiteration to strengthen multilateral institutions, including the WTO, is well meaning but offers no suggestion to address Donald Trump’s wont for unilateralism.

It talks of an “Afghan-led and Afghan-owned national peace and reconciliation process” and supports an inclusive “Syrian-led Syrian-owned” political solution of the conflict in Syria. It welcomes the recent developments regarding the complete denuclearisation of the Korean Peninsula and urges all parties to “fully comply with their obligations” and effectively implement the JCPOA-Iran nuclear deal.

Israeli-Palestrina relations and the conflict in Yemen have been flagged on predictable lines. Need of a universal legal anti-terrorist convention and cooperation in counter-terrorism, including cyber crimes sounds familiar; there was no mention of Pakistan-based terrorists. Has China retracted from its Xiamen declaration?

Collaboration for the preservation of biodiversity, promoting ocean economy and protecting outer space from arms race are welcome, but the emphasis on promotion of democracy sounds ironic, as both China and Russia can’t be called democracies. Similarly, if China pursues its territorial claims in the South China Sea with little regard to international laws, its advocacy of a rule-based international order sounds hollow. Above all, Brics should act on what it proposes.