Flashpoint Kiev, as Russia comes in from the cold

Krishnan Srinivasan
The writer is a former Indian foreign secretary

The widespread international endorsement of the prisoner exchange might herald a new Western approach towards Russia. 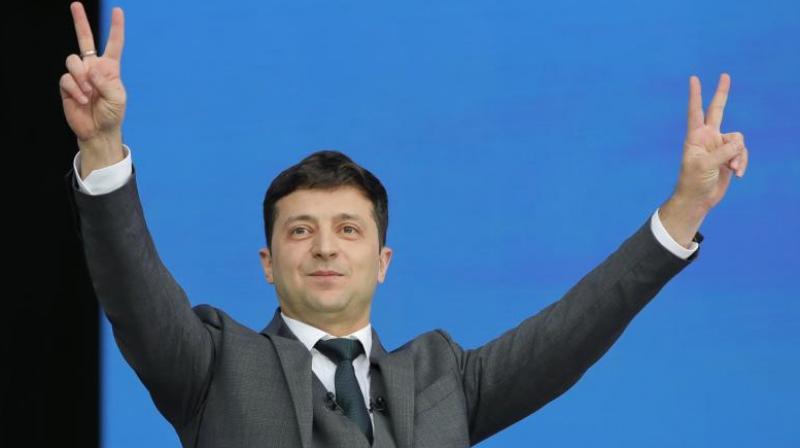 Ukranian President Volodyyr Zelensky, the 41-year-old comedian-turned-actor-turned politician, has been in the news of late as the person under blatant pressure by US President Donald Trump to investigate the alleged wrongdoings of Mr Trump’s political opponent, former US vice-president Joe Biden. But behind Mr Zelensky’s rise to power is a more important story for its long-term implications.

After his crushing election victory last March, Mr Zelensky has not yet addressed his nation’s rampant corruption and cronyism, but enjoys an approval rating of 70 per cent due to his energetic approach to government, with hundreds of personal edicts and orders, the removal of criminal officials, multiple foreign and domestic tours, and the victory in July of his newly-minted political party in Parliament. Mr Zelensky continues to burnish his all-things-to-all-people persona and has taken a major step towards the relaxation of tensions with Russia and unification of the country through the recent exchange of 35-for-35 prisoners. Both Kiev and Moscow hope this will unblock the dialogue and lead to an eventual solution of the simmering conflict between the Ukrainian government and its separatist eastern provinces of Donetsk and Lugansk. The prisoner exchange was noted favourably in Washington, Paris and Berlin, and there is hope that the four-nation format of Russia, Ukraine, Germany and France will meet soon to discuss the agreements signed in Minsk in 2015, which remain unimplemented, to bring an end to the bloodshed and reintegration of the two provinces.

The importance of this issue is that Ukraine lies at the critical centre of the revived US-Russian Cold War, and its location on Russia’s western border makes it a highly inflammable flashpoint. Over 13,000 people have so far died in eastern Ukraine in the six-year fighting with the two sides, backed by the West and Russia respectively, resulting in personal tragedies to millions of inter-married Russian-Ukranian families, to say nothing of the political and financial drain on both countries.

In this situation, hopes repose on Mr Zelensky, who faces powerful forces arrayed against peace in his own country as well as in the United States and Russia. In Ukraine, armed ultra-nationalists oppose peace initiatives, and in Moscow President Vladimir Putin, who does not fully control the breakaway Ukranian provinces, cannot risk accusations of betraying the Russian brethren in the near-abroad. Washington’s policy up to now has been designed to sever Ukraine’s age-old ties to Russia and bring it into the Nato alliance. A symptom of the fluctuating ties between Ukraine and Russia is seen in Crimea, which was gifted from Russia to Ukraine in 1954 by then Soviet leader Nikita Khrushchev and retaken by Russia in 2014 after a pro-Russian President of Ukraine was toppled by a popular movement.

For now at least, Mr Zelensky has set aside both the question of Crimea and his immediate predecessor’s description of Ukraine’s eastern rebels as “terrorists and Putin’s stooges” in favour of regarding the population of the eastern provinces as people with their own legitimate interests, even if they favour closer ties with Russia on the basis of language, economy and religion, and were unable to vote for him earlier this year. Mr Zelensky is a native Russian speaker who carries no baggage from the movement that swept the pro-Russian President from office in 2014, but has taken care to reassure the western part of Ukraine of his pro-Europe commitment by making the European Union headquarters in Brussels the destination of his first trip abroad.

The greatest compliment to be paid to Mr Zelensky, despite the fact that he is a political novice, is that he has not disappointed all those who had huge expectations from him, and he has not alienated any of his wide-ranging support. But pitfalls await. Eastern Ukraine is unlikely to integrate seamlessly into the rest of Ukraine as if the bloody conflict of the past never happened. Mr Zelensky’s agreement to any measures of autonomy for the two separatist provinces will fuel those domestic voices which caution against being soft towards Russia, but maintaining the status quo during his five-year term on this essential question will see the popular trust in Mr Zelensky seep away. On relations with the West, the association agreement with the EU was signed five years ago, but EU membership looks as distant as it was 20 years ago. Joining Nato may be a closer prospect, but doing so will divide the Ukranian population again, and create another deep rift with Russia, which can never be healed. Tackling corruption will be necessary if Ukraine is to transition into being a stable democracy, but there seems to be no considered plan for this other than vendetta against outgoing politicians — in other words, the continuing staple of Ukranian politics thus far. Mr Zelensky should take note of the precedent of another young European leader, who also seemingly came from nowhere to win the presidency backed by a new political party. This was French President Emmanuel Macron, whose ratings now range between 41 and 26 per cent.

The widespread international endorsement of the prisoner exchange might herald a new Western approach towards Russia. The current 10-year gas transit agreement between Russia and Ukraine expires in December and the outcome of gas talks between Russia, EU and Ukraine will be a good indication of the climate. Mr Trump wants Russia to rejoin the G-7, Paris and Moscow have just concluded meetings of their foreign and defence ministers, and the French and German governments have called for a rethink on relations with Russia since global problems cannot be resolved without its cooperation. Mr Macron now sees himself, without the inhibiting presence of Britain in the EU, as the chief East-West interlocutor.

Inevitably, there is also the China factor. The two decades after 1970 saw the West succeed in energetically enlisting China against the Soviet Union. But after 2010 China has replaced Russia in the Western strategic playbooks as the chief threat, and bringing Moscow in from the cold will have as its main purpose rescuing the Russians from the political, economic and strategic embrace of the Chinese, into which, according to this scenario, they were forced by hostile Western attitudes. This is a view gaining some traction in many Western capitals. The price to be paid will be to accept the de facto situation in Crimea and a rollback of the sanctions imposed by the West.