Mutilation of J&K: An economy reduced to shambles

By asking tourists and Amarnath pilgrims to leave the Valley in July last year, the government in one fell swoop caused irreversible damage 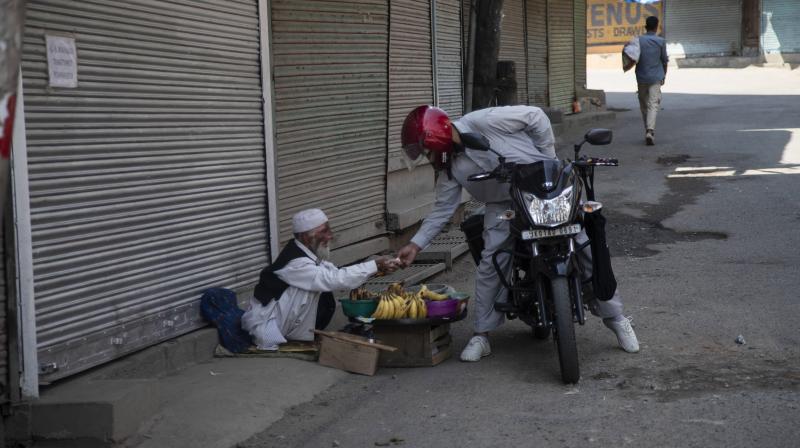 A commuter buys banana from a street vendor at a closed market during a lockdown in Srinagar. PTI Photo

Srinagar: Jammu & Kashmir’s economy, bruised by years of turmoil, was struggling to recover in 2019 but the post-August 5, 2019 lockdown knocked it down again, and then came COVID-19 to kick it downhill.

“The Kashmir Valley’s economy has suffered losses to the tune of over Rs. 40,000 crores (4.5 billion USD) in the past one year,” said Sheikh Ashiq, president of the Kashmir Chamber of Commerce and Industry (KCCI).

Prolonged curfews and an almost complete communications blackout enforced by the government to establish its control in the erstwhile state a year ago made it extremely hard for a commoner to earn a living.

Apart from those who lived hand to mouth like daily-wage labourers, small-time traders and transporters, traditional handicrafts, horticulture and tourism businesses suffered enormously.

By asking tourists and Amarnath pilgrims to leave the Valley in July last year, the government in one fell swoop caused irreversible damage to the state's economy, KCCI said.

The disruptions that preceded and followed the August 5, 2019 move resulted in a loss of tens of thousands of jobs and forced borrowers to default on their loans taken from financial institutions. While a substantial number of accounts turned bankrupt, many business establishments closed down.

Within four months after J&K was downgraded and split up, the Valley’s ten districts suffered a loss of Rs 17,878.18 crore, as per a report released by the KCCI in December last year.

“We were assured that a series of measures would be initiated soon as a comprehensive response to save our economy from collapse.

But COVID-19 seems to have impeded steps the government could have taken in this direction,” said Ashiq. He added, “We’re now just hoping against hope that something good will be done.”

While J&K  grapples with psychological and emotional crises, the opposition openly accuses the government of deliberately attempting to cause economic disempowerment of the Valley’s Muslim population by targeting its main and traditional sources of income by applying the law arbitrarily.

Analyst Prof. Noor Ahmed Baba said, “Many, many people in Kashmir strongly believe that the government of India is making them politically pathetic, culturally infertile and economically dependent.”

However, Lt. Gov. Murmu has said that the government has already initiated steps to “give a boost to the local economy, generate employment opportunities and ensure overall development of J&K”.

One of his aides said that the J & K Administrative Council which met here recently approved a relief package to revive the UT’s economy and tackle the slowdown caused by the pandemic.

“Earlier, the Union government rolled out a Rs. 20 lakh crore package under the umbrella of ‘Atmanirbhar Bharat Abhiyan’, sharply focusing MSMEs, priority sectors and vulnerable segments. However, the J&K government felt a need to consider similar hand holding measures for sectors and borrowers not covered under that package,” he said.