The chief minister flashed a smile as his advisers congratulated him for the flawless flight against the BJP. 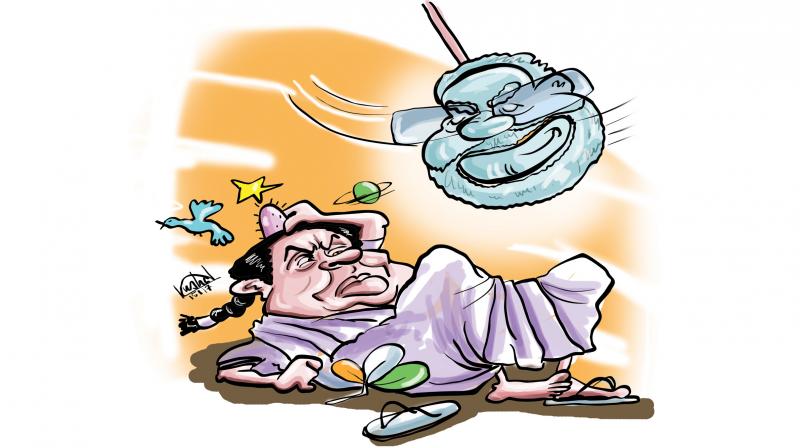 Ms Banerjee also revealed that she had information that the Modi government was planning to arrest many other TMC leaders.

When actor-turned-MP Tapas Pal was arrested by the CBI in the Rose Valley chit fund scam case, West Bengal chief minister Mamata Banerjee was surprised and also a bit upset. But as she acknowledged, she was “shocked” beyond belief when the Central agency also nabbed Sudip Bandyopadhyay within a week of Mr Pal’s arrest.

Mr Bandyopadhyay is not just an MP: he is the Trinamul Congress’ parliamentary party leader in the Lok Sabha. An outraged Mamata went on the warpath against the Narendra Modi government. Possibly for the first time, the Trinamul Congress held protests against party MPs’ arrest not only on the streets of Kolkata but simultaneously in over half a dozen states, including New Delhi, Odisha and the northeastern states. Not only her attacks intensified, even the language she used against Mr Modi became increasingly virulent.

On more than one occasion she has even dared the Centre to arrest her as well as all her MPs. “This is sheer political vendetta. Modi is targeting my party leaders because I have been in the forefront of the anti-demonetisation agitation,” she said. Ms Banerjee also revealed that she had information that the Modi government was planning to arrest many other TMC leaders, including Abhishek Banerjee (MP and her nephew), Sovan Chatterjee (city mayor) and Firhad Hakim (minister).

In the run-up to the 2014 Lok Sabha elections, Ms Banerjee and Mr Modi had bitterly attacked each other. While scoffing at her artistic skills, Mr Modi had asked Ms Banerjee to reveal the name of the person who had bought one of her paintings for a whopping `1.80 crores. A predictably angry Mamata had called him “shaitan” and said if she had been in power at the Centre instead of the Congress, she could have sent Mr Modi to jail with a rope tied around his waist.

“Didi failed to keep her promise. But Modiji, who never made any threats, is sending one TMC leader after another to jail,” a Trinamul Congress MP rued.

Naveen’s flawless fight
Odisha chief minister Naveen Patnaik is not a person to be cowed down by intimidation from rival political parties — this is what he has proved on many occasions. The bachelor-politician, who is the president of the Biju Janata Dal, once again gave an example of his daring nature just a day after the CBI conducted raids in the residences of some of his party leaders, including Balasore MP Rabindra Kumar Jena and Choudwar MLA Pravat Ranjan Biswal, allegedly at the instance of Union petroleum and natural gas minister Dharmendra Pradhan.

As the grapevine has it, Mr Patnaik called his loyalist officers to his residence on Friday and consulted them on what action can be taken to teach the BJP a lesson.

Within 24 hours, the state vigilance department conducted raids on the gas agency of Mr Pradhan’s brother at Talcher and several filling stations run by BJP supporters.

Feeling fortunate to get the assignment from the boss, Mr Maharathy told the media: “You people understand better why vigilance raids were conducted. The BJP must understand that it is not the only actor in the field.”

The chief minister flashed a smile as his advisers congratulated him for the flawless flight against the BJP.

And the winner is
It was “star-war” of a kind rarely witnessed. Indian cricket team discard Harbhajan Singh chose an unlikely rival in yoga exponent-cum-consumer goods manufacturer Baba Ramdev to engage in a bout of “panja ladai” (arm wrestling) to mark the inauguration of Chhattisgarh Cricket League in the steel city of Bhilai in the south-central Indian state on January 11. 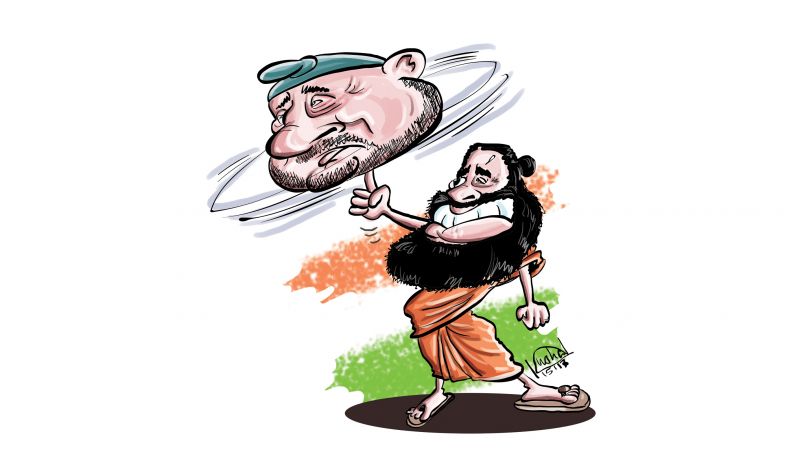 An eerie silence had ruled the show when the stars of two sports — cricket and yoga — tried to outsmart each other with a demonstration of their muscle power.

Suddenly the yoga master spun out a trick and lifted the tweaker in the air, robbing the crowd of the opportunity to see a winner in the bout.

The amused crowd, which was witnessing the unusual and exciting duel with bated breath anticipating a result, appeared disappointed when the suspense-filled wrestling between the two celebrities ended in such an anti-climax way.

But a section of the crowd read political overtone in Ramdev, known for his strong saffron leanings, giving an unexpected twist to the race.

They saw in wily Baba’s abrupt move of withdrawing from the race and lifting the spin bowler in air a symbolic hoisting of a winner’s trophy.

For Harbhajan’s recent denial of speculation about being roped by the Congress to campaign for the party in the February Assembly polls in Punjab is still fresh in the minds of people.

Baba’s supporters described his “symbolic” action as a show of victory over the Congress for weaning away Harbhajan from the party. But, others were not convinced.