From Ganga to “gau” to “gadha”, the level of politics in the ongoing Uttar Pradesh Assembly elections is going down by the day. 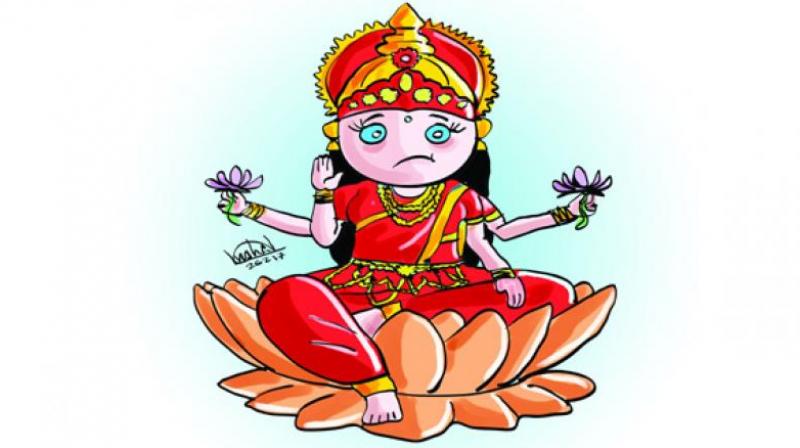 The BJP leaders claim that lotus (the BJP’s party symbol) has bloomed in many districts, mostly in western Odisha.

Lakshmi loves fresh lotus
Outspoken Biju Janata Dal vice-president and senior minister in Naveen Patnaik’s council of ministers, Damodar Rout, is not a person to lie low and accept his party’s poor show vis-à-vis the BJP in the just-concluded panchayat polls in Odisha.

When other members of his party and even chief minister Mr Patnaik accepted loss of at least 200 zilla parishad seats to the BJP in comparison to the party’s show in 2012 polls and attributed the defeats to money and muscle power used by Chhattisgarh chief minister Raman Singh in border districts, the nonconformist septuagenarian politician, however, in his inimitable style interpreted the results in a different way.

“The BJP leaders claim that lotus (the BJP’s party symbol) has bloomed in many districts, mostly in western Odisha. Actually, Goddess Lakshmi loves lotus. She sits on fresh lotus and leaves it when it withers away. Wait for a few days and you will find Goddess Lakshmi deserting the BJP once the lotus (here lotus is used as metaphor for money power) starts losing its colour and wilts.”

Ganga, gau and gadha
From Ganga to “gau” to “gadha”, the level of politics in the ongoing Uttar Pradesh Assembly elections is going down by the day. In the Lok Sabha elections, “Ganga” was propped up as a major issue by the BJP, which later included “gau” (cow slaughter) in its agenda. This time in UP polls, the level has gone to the donkeys.

Chief minister Akhilesh Yadav, who had maintained the dignity of the office he holds by sticking to development in his issue, joined the bandwagon last week when he said that in Gujarat, even donkeys are publicised and also appealed to Amitabh Bachchan not to campaign for them. 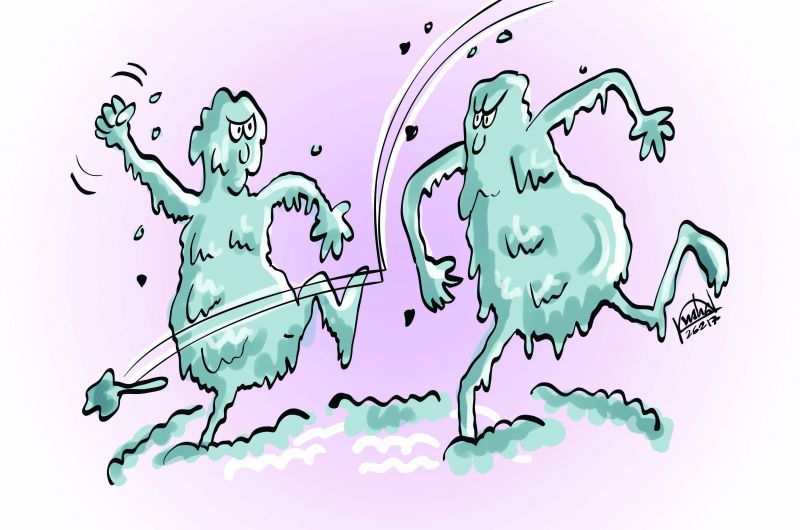 The loaded statement, apparently, hit the target and the BJP — from Gujarat to UP — was up in arms against the Samajwadi Party. In less than 24 hours, SP spokesman Rajendra Chaudhary retaliated by terming Prime Minister Narendra Modi and BJP president Amit Shah as “terrorists”.

The BJP chief returned the fire when he said that UP wanted to get rid of KASAB — “Congress, Samajwadi and BSP”.

Rashtriya Lok Dal president Lalu Prasad Yadav, who came to UP to campaign, added to the slugfest with some unprintable statements. The Congress, however, has kept out of the mess. With three phases still left to go, one is forced to think where the campaign will finally end up.

While campaigning for UP elections at Gonda on Friday, the PM said, “There is so much poverty in Odisha that if you search for poorest districts in the country you will find them in this state. If topics on starvation, illiteracy and unemployment are discussed, people give example of Odisha.” Minutes after Mr Modi’s words were aired, BJD leaders were on their toes and launched counterattacks on him. 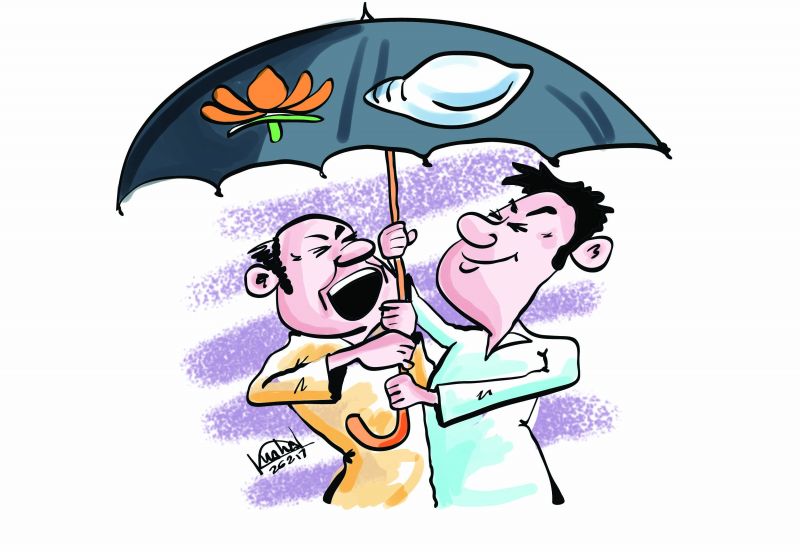 “Does Mr Modi know that his party was very much sharing power with us in Odisha from 2000 to 2009. If he claims credit for anything good he has done for the state, he must equally hold himself responsible for what he says about Odisha,” BJD spokesperson Pratap Deb said. Union minister Dharmendra Pradhan had to call a press meet in Delhi to defend his leader against the BJD onslaught.

Digital dilemma
The BJP-led Harayna government is trying to implement the Digital India initiative of the Centre in the state. However, when it comes to its legislators, Digital India has not really picked up with the fraternity.

Under the state government’s efforts to make its legislators IT-savvy, they are provided with latest laptops. The effort has not really paid, as data shows hardly any MLAs send their questions online for the Assembly session.  For the session beginning this week, no online query has been sent by the MLAs to the Vidhan Sabha.

The ‘monk’ who flaunts power
Yoga guru Baba Ramdev caused a tremor in Madhya Pradesh politics when he dropped hints on keeping his options open for his political leanings. The Patanjali founder, known for his proximity to the saffron parivar, had made it amply clear that his support should not be taken for granted by the BJP as he was not averse to throwing his weight behind the Congress, of course, with a rider.

“I will not hesitate to support the Congress if the grand old party works in the interest of the country,” he declared while interacting with the media in Bhopal on February 20. 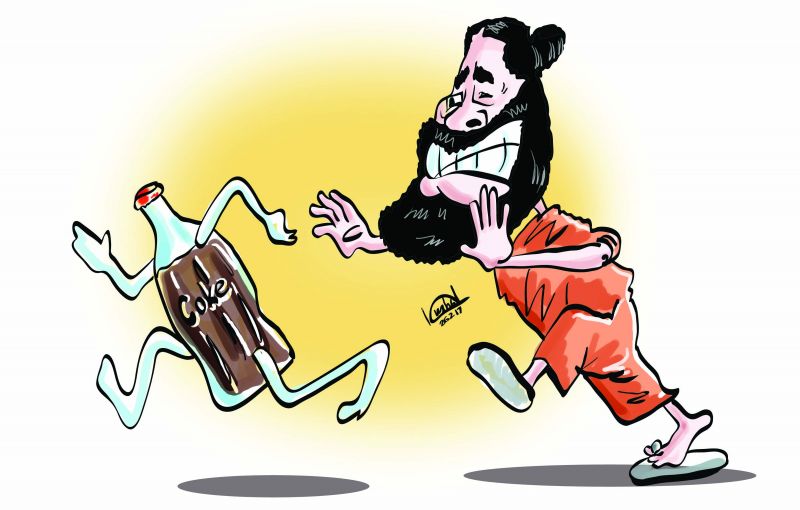 He was there to participate in the Narmada Seva Yatra, a campaign launched by the Shivraj Singh Chouhan government to create awareness among the people to make Narmada river, the lifeline of the state, clean.

The saffron-clad monk’s apparent threat comes in the wake of MP government’s decision to clear a project by soft drink giant Coca-Cola to set up its facility on the banks of Narmada. Ramdev is known to be bitter critic of the cola majors, PepsiCo and Coca-Cola, describing them as major polluting agents in the country.

“Multinational companies fill coffers of political parties in India. That is the reason why no state governments are willing to promote ‘swadeshi’ products and also dared to take action against the MNCs (for any of their wrongdoings)”, he observed.

Next day, the yoga master-cum-entrepreneur was greeted with a warm hug from Mr Chouhan at the function organised as part of Narmada Seva Yatra. The development has caused unease in the camp of soft drink major. A monk’s spell!