Rahul’s temple run and projecting a ‘soft Hindu’ image may not help Cong in polls. 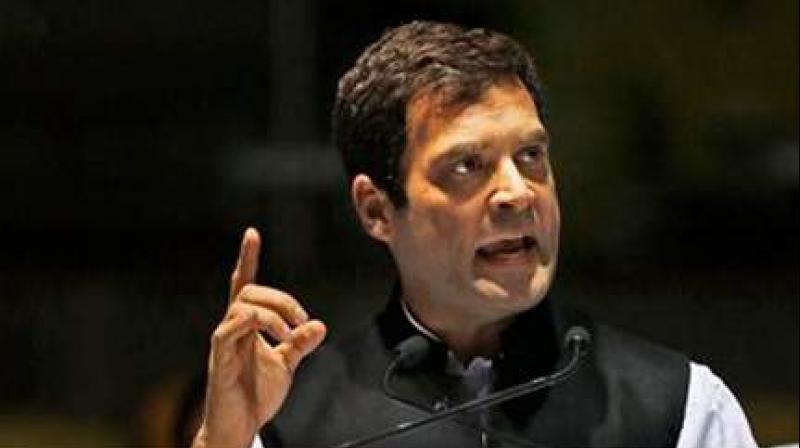 People can see through his facade
Aditya Jha
The Congress strategy to project its party president Rahul Gandhi as a great defender of Hinduism may not impress people. This is a party that has, in the past, blatantly supported appeasement of Muslims and ignored Hindu interests for its narrow political gains. People still recall that former Prime Minister Manmohan Singh had said Muslims have the first right to the nation’s resources. When the New York Times reported that Mr Gandhi was a Catholic (the news was widely circulated), the Congress president did not challenge it. Mr Gandhi is visiting temples to woo voters but he will not be successful. He is a mute person and does not match the ideology of the Congress, the party that has always played the game of minority appeasement.

The party speaks about development of religious places, including temples. But has any Congress-led government given any concession to Hindu pilgrims or started any schemes for them, ever?

In the recent Gujarat elections, despite all efforts by Mr Gandhi to project his image as that of a janeudhari Brahmin, the Congress could not win the state. The margin of victory for the BJP was low only because of a cynical caste alliance forged by the Congress and two decades of anti-incumbency. The Congress claims that it does not use religion for political gains but it has always worked with the motive of winning elections. Mr Gandhi makes a series of visits to temples in Gujarat before the Assembly elections but in Meghalaya he joins a rock show!

Mr Gandhi was made the party president out of an utter compulsion; history is witness to the fact that whenever someone from outside the Nehru-Gandhi family has become party president, the party has begun disintegrating.

His attendance in Parliament is pathetically low, but Mr Gandhi enjoys the advantage of a friendly media that highlights his speech on the rare occasions when he speaks up. While his speeches evoke derisive laughter in the House, few in the media say that people don’t take him seriously.

Another big problem with Mr Gandhi is that he does not stick to any issue. He raises an issue one day, another the next day, and forgets all previous issues. He never visited the dalit families with whom he had dinner again. He never travelled by local train twice. He didn’t go to Bhatta Parsaul again. He even stopped talking about GST and demonetisation after the Gujarat elections. This is a bad marketing strategy. Since his debut in mainstream politics, he has not led the Congress to victory in any election because the Indian public is intelligent and aware. Rahul Gandhi’s temple run and projecting a soft Hindu image shows his bankruptcy of ideas, ideology and leadership.

The writer is a BJP leader

Temple visit is not a new phonomenon
Ashish Dua

It is wrong to assert that the Congress and its leaders are playing soft Hindutva. This has been alluded to in the past as well. The Congress contests and wins elections on the body of its work.

At the time of the Gujarat Assembly elections too the question was raised about why Congress president Rahul Gandhi was visiting temples. The answer is that he is and has been a devotee of Lord Shiva, and often visits temples. What’s is wrong if he is visiting temples and reaching out to people? No temple, mosque or church in this country is exclusive property of any religion. Our party leaders have always visited religious places in the past. We Indians are secular people who learn from other places of worship. Almost everyone who visits Amritsar visits the Golden Temple. It is only the media and the BJP who are seeing tactics in this move.

Mr Gandhi is not the first one in the Nehru-Gandhi family to visit a temple as even Sonia Gandhi has visited the temples in the past.

The practice of visiting temples is not a new one. Several senior leaders of the Congress have visited temples at different times. Mr Gandhi has always been visiting temples and nothing more should be read into this. In his recently-concluded tour of Karnataka, Mr Gandhi visited temples, dargahs and met a cross-section of people from across society. Now a controversy is once again being stirred that before visiting a temple Mr Gandhi had non-vegetarian food. Even in Gujarat, during the Somnath Temple visit, a controversy was made out about an entry in a register. This shows that the BJP can stoop to any level for political gain.

The BJP is evading key issues that we have been raising, and is busy fomenting communal trouble in poll-bound Karnataka. It is deliberately sending leaders who are polarising society on sensitive communal issues. It is a very serious problem.

The BJP waxes eloquent about its attack on corruption and its penchant for development. But its track record does not back its utterances. Several cases of corruption have been brought forward, but the BJP and its government is conspicuous by its silence. The leader of the Opposition in the Karnataka Assembly, Jagdish Shettar, has said that he will expose the fake Hindutva of Mr Gandhi. Now I would, in all humility, like to tell Mr Shettar to stop doling out certificates about who is a Hindu and who is not.

People have seen through the non-existent agenda of the BJP. The winds of change have already started blowing. Look at the recently concluded Assembly elections in Gujarat, the BJP just about managed to form the government in the state. And it lost wholesale in the Rajasthan by-elections.

The writer is an AICC member and media coordinator