Indore sub-inspector tested negative twice after a month in quarantine 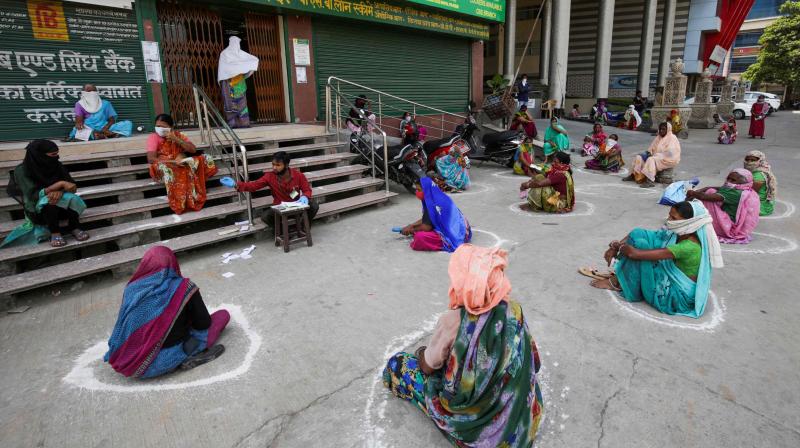 Women sit in social distance circles outside a bank as they wait to collect their pension in Bhopal. (AFP)

Bhopal: A sub-inspector posted in Indore won his battle against Covid-19 but succumbed to a cardiac arrest hours before he was to be discharged from hospital.

Devendra Kumar Chandravamsi, 41, had tested positive for the virus on March 16 and was put into quarantine at a hospital in Indore. After 28 days in isolation, two successive samples of his returned negative for coronavirus, and he was go home on Sunday. But hours before that, he suffered a cardiac arrest and died.

Chandravamsi was the first casualty among frontline personnel in the fight against the coronavirus in Madhya Pradesh.

A pal of gloom descended on police circles in the state following his demise.

Chief minister Shivraj Singh Chouhan expressed anguish and declared an ex-gratia of Rs 50 lakh to Chandravamsi’s family, apart from appointing his widow as an assistant sub-inspector of police.

At least a dozen policemen and 90 health personnel are among 1407 people who have tested positive for the virus in MP so far. There have been 72 deaths due to Covid-19.

Indore is the epicentre of the pandemic in the state, with 890 confirmed cases so far and 52 deaths.

The state capital Bhopal has 214 confirmed cases and six deaths.

However, total 131 people in the state including the state’s health secretary Pallavi Jain Govil, who had tested positive earlier, have recovered and were discharged from hospital.

In another development, one of the key accused in the attack on medical personnel in Indore recently, who tested positive for the virus later on, fled from a hospital in Jabalpur.

“We have launched a manhunt for him,” said a senior police officer of Jabalpur district.