Most distant star ever detected sits halfway across the universe 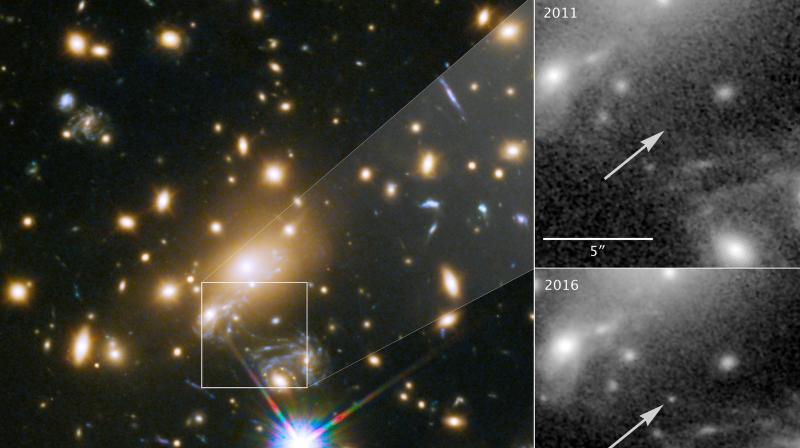 Because its light has taken so long to reach Earth, looking at this star is like peering back in time to when the universe was less than a third of its current age. (Photo: NASA)

Scientists have detected the most distant star ever viewed, a blue behemoth located more than halfway across the universe and named after the ancient Greek mythological figure Icarus.

Researchers said on Monday they used NASA’s Hubble Space Telescope to spot the star, which is up to a million times more luminous and about twice as hot as our sun, residing 9.3 billion lights years away from Earth. It is a type of star called a blue supergiant.

The star, located in a distant spiral galaxy, is at least 100 times further away than any other star previously observed, with the exception of things like the huge supernova explosions that mark the death of certain stars. Older galaxies have been spotted but their individual stars were indiscernible.

The scientists took advantage of a phenomenon called “gravitational lensing” to spot the star. It involves the bending of light by massive galaxy clusters in the line of sight, which magnifies more distant celestial objects. This makes dim, faraway objects that otherwise would be undetectable, like an individual star, visible.

“The fraction of the universe where we can see stars is very small. But this sort of quirk of nature allows us to see much bigger volumes,” said astronomer Patrick Kelly of the University of Minnesota, lead author of the research published in the journal Nature Astronomy.

“We will now be able to study in detail what the universe was like — and specifically how stars evolved and what their natures are — almost all the way back to the earliest stages of the universe and the first generations of stars,” Kelly added.

Because its light has taken so long to reach Earth, looking at this star is like peering back in time to when the universe was less than a third of its current age. The Big Bang that gave rise to the universe occurred 13.8 billion years ago.

The star spotted in this study is formally named MACS J1149+2223 Lensed Star-1, but its discoverers dubbed it Icarus, who flew so close to the sun that his wings fashioned from wax and feathers melted, sending him plunging fatally into the sea.

Kelly said he preferred the nickname Warhol, after the American artist Andy Warhol, owing to the star’s “15 minutes of fame” following its discovery.

“No one liked that, except for one other person, so it ended up Icarus,” Kelly said.