The planet is actually being born around a star which, as per the cosmological timescale, is young with 5.4 million years of age. 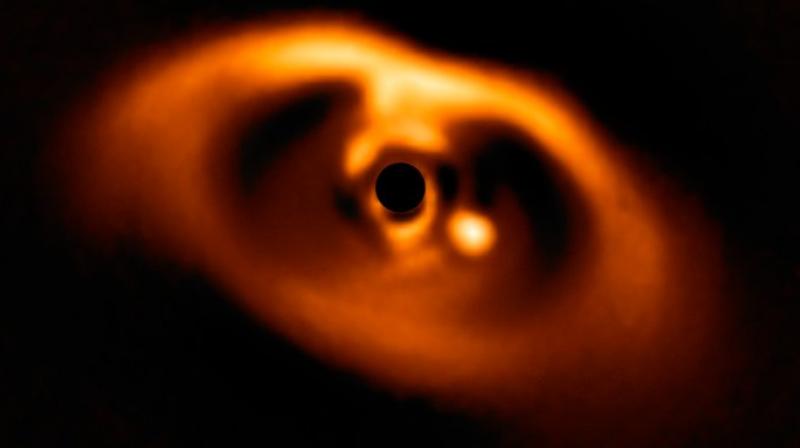 With the help of an equipment named coronagraph, the scientists managed to get a clear picture.

Just like Earth developed gradually and turned into a place where human could live, there are uncountable planets across the galaxy which keep taking birth. While scientists keep looking for planets which are fully matured, it is interesting to see one which is still midway of growing up. More interesting would be to encounter how planets develop from scrap and that's what scientists from Chile have got for us now.

Around 370 light years apart from the earth, a planet has been shot being midway of its birth. The picture has been captured by scientists at Max Planck Institute located in Chile and the instrument used is a Very Large Telescope placed in European Southern Observatory.

The planet in question is actually being born around a star which, as per the cosmological timescale, is young with 5.4 million years of age. This star is surrounded by a proplanetary disc which is an assembly of cloud and dust. The star around which this new planet is incepting is called as PDS 70 and so, the planet is christened as PDS 70 b.

This is common nature of all-stars that they are surrounded with a proplanetary disc. This disc aids in the formation of planets which accumulate the contents of the disc and become solid in order to form a huge mass of land. This newly discovered planet has been formed in the same way. Similar to how the earth revolves around the sun, the PDS 70 b planet has also been recorded to be zooming around its star but the distance is larger as compared to that between earth and sun.

Snapping the picture of the planet has been a tough task owing to the highly vivid light which emanates from the star and makes it difficult to spot the planet, its shape and size. But, with the help of an equipment named coronagraph, the scientists managed to get a clear picture. They also fetched the tentative details about the temperature of the planet which has been reported somewhere around 1000 degree Celsius.

An expert involved in the study stated that this seems to be the most accurate report as compared to the earlier ones when the captured images didn't clearly convey of them being planets. Research about the planet is still underway as experts continue the effort to find more evidence related to the existence of PDS 70 b.