These bricks are made using human urine 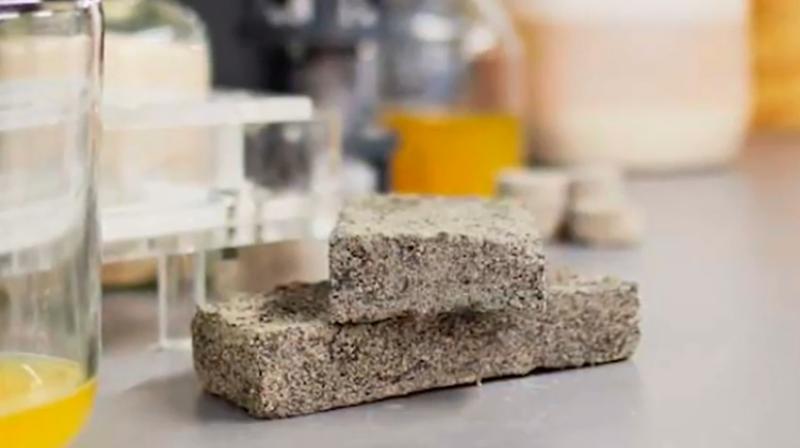 The grey bricks are produced in a lab over eight days using urine, calcium, sand and bacteria. Fertilizers are also produced during the processes. (Photo: University of Cape Town)

South African researchers say they have made bricks using human urine in a natural process involving colonies of bacteria, which could one day help reduce global warming emissions by finding a productive use for the ultimate waste product.

The grey bricks are produced in a lab over eight days using urine, calcium, sand and bacteria. Fertilizers are also produced during the processes. And no, the bricks do not smell.

The bricks are made using urea — a chemical found naturally in urine and also synthesised around the world to make fertilizer. The process of growing bricks from urea has been tested in the United States with synthetic solutions, but the new brick uses real human urine for the first time, the researchers said.

“We literally pee this away every day and flush it through the sewer networks,” said Dyllon Randall, a senior lecturer at the University of Cape Town’s civil engineering department who is part of the team that developed the brick. “Why not recover this instead and make multiple products?”

The bio-bricks are created through a process called microbial induced carbonate precipitation, which is similar to the process that naturally produces coral reefs.

Loose sand is colonised with bacteria that produce the enzyme urease. The enzyme breaks down the urea in urine, while producing the rocky substance calcium carbonate through a complex chemical reaction.

A brick or column of any shape can be made. The bricks are formed at room temperature, cutting the harmful carbon dioxide emitted when making regular bricks that are kiln-fired.

One obstacle preventing mass production: the bricks use huge amounts of pee. To make a single brick requires about 20 liters of urine - a couple of weeks’ worth of wee for a typical adult.

“So, I get it from the boys bathroom opposite the laboratory. I put a little sign up and all the university boys contribute to my research,” said Suzanne Lambert, who proved the concept for the research by making the first brick.

“I definitely see commercialisation in the next decade or two, but there is still a lot of lab work to be done,” she said.