Sorry, sci-fi fans: star's oddness not due to alien mega-structure

The dimming could be due to some sort of dust, though the cause remains uncertain. 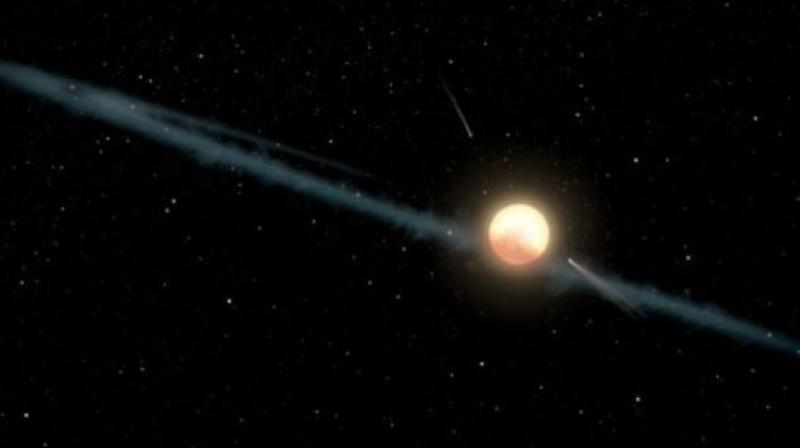 The data showed less dimming in the star’s red light than in its blue light, and a large opaque object would dim all colours of light equally when passing in front of a star. (Photo: Reuters)

It was too good to be true. Scientists have ruled out the most exotic explanation — an orbiting alien mega-structure -- for the behaviour of a celestial oddity dubbed Tabby’s Star that has been puzzling scientists with its sporadic dimming and brightening.

Astronomers said on Wednesday that the most thorough study to date of the star, officially called KIC 8462852, showed that its dimming episodes are not caused by a large opaque object passing in front of it. The dimming could be due to some sort of dust, they added, though the cause remains uncertain.

The researchers relied on observations of Tabby’s Star from March 2016 to December 2017 using Las Cumbres Observatory telescopes in Maui and the Canary Islands. The star is named after Louisiana State University astrophysicist Tabetha Boyajian, who was instrumental in identifying its idiosyncrasies in 2015.

Beginning in May 2017, the scientists observed four episodes when the star’s light dipped. The data showed less dimming in the star’s red light than in its blue light, and a large opaque object would dim all colours of light equally when passing in front of a star, Boyajian said.

“We took measures of the star’s brightness in several colours. Data taken in this way can inform us on what kind of material is passing in front of the star,” Boyajian added.

Numerous hypotheses have been offered about the star’s occasional dimming, including a hypothetical mega-structure called a Dyson Sphere built to surround a star and harvest its energy output. “Sure, it’s disappointing that this isn’t the anomaly that will turn out to be that big discovery. But we always knew the chances were low. It’s like finding out that your lottery ticket isn’t a winner: disappointing, but not surprising,” said another of the researchers, Penn State astrophysicist Jason Wright.

Tabby’s star, roughly 40 per cent more massive than the sun, is located about 1,280 light-years away from our solar system in the constellation Cygnus. Its light has been observed dimming as much as 22 per cent.

The new observations were consistent with the effects of dust — fine grains of material — on the starlight, Wright said. There was no hint of gas along with the dust, Wright said.

“We still aren’t 100 per cent sure where the dust is, but it seems to be somewhere around the star,” Wright added. “We’re still not sure where it’s coming from — maybe colliding asteroids or comets.”

The findings were published in The Astrophysical Journal Letters.