This is the first evidence of an exoplanet stratosphere - the layer of atmosphere where temperature increases with higher altitudes. 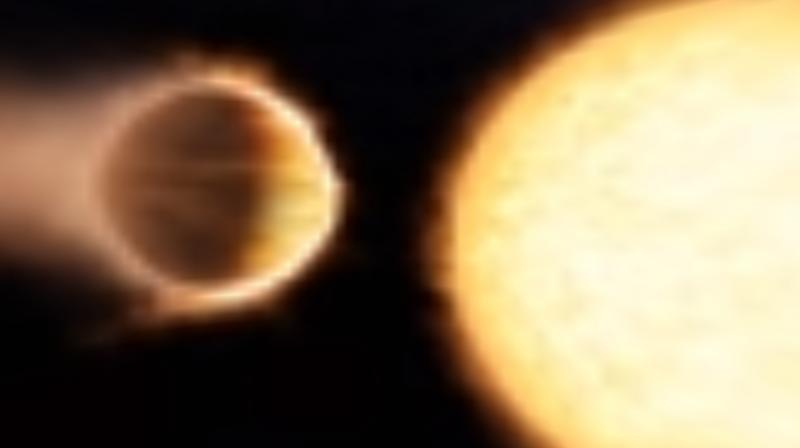 Scientists have for the first time discovered glowing water molecules in the atmosphere of a giant Jupiter-like planet located 900 light years from Earth that is hot enough to boil iron.

This is the first evidence of an exoplanet stratosphere - the layer of atmosphere where temperature increases with higher altitudes.

Previous research spanning the past decade has indicated possible evidence for stratospheres on other exoplanets.

"When it comes to distant exoplanets, which we can't see in the same detail as other planets here in our own solar system, we have to rely on proxy techniques to reveal their structure," said Drake Deming, a professor at University of Maryland in the US.

"The stratosphere of WASP-121b so hot it can make water vapour glow, which is the basis for our analysis," said Deming.

To study the gas giant's stratosphere, scientists used spectroscopy to analyse how the planet's brightness changed at different wavelengths of light.

Water vapour in the planet's atmosphere, for example, behaves in predictable ways in response to certain wavelengths of light, depending on the temperature of the water.

The water molecules in the atmosphere of WASP-121b similarly give off radiation as they lose energy, but it is in the form of infrared light, which the human eye is unable to detect.

"Theoretical models have suggested that stratospheres may define a special class of ultra-hot exoplanets, with important implications for the atmospheric physics and chemistry," said Tom Evans from the University of Exeter in the UK.

"When we pointed Hubble at WASP-121b, we saw glowing water molecules, implying that the planet has a strong stratosphere," Evans said, lead author of the study published in the journal Nature.

The exoplanet orbits its host star every 1.3 days, and the two bodies are about as close as they can be to each other without the star's gravity ripping the planet apart.

This close proximity means that the top of the atmosphere is heated to a blazing hot 2,500 degrees Celsius – the temperature at which iron exists in gas rather than solid form.

"This super-hot exoplanet is going to be a benchmark for our atmospheric models, and will be a great observational target moving into the Webb era," said Hannah Wakeford, a research fellow at the University of Exeter.