Have astronomers found 1st moon outside our solar system? 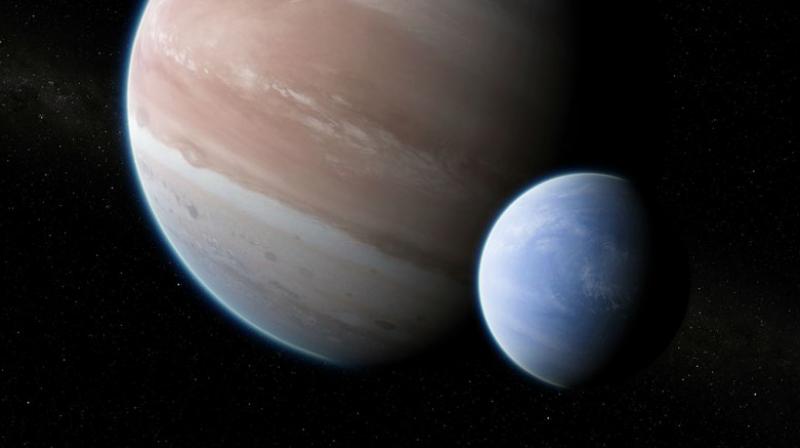 This illustration provided by Dan Durda shows the exoplanet Kepler-1625b with a hypothesized moon. On October 4, 2018, two Columbia University researchers reported their results that the potential exomoon would be the size of Neptune or Uranus. The exoplanet, about 8,000 light-years away, is as big as Jupiter. (Dan Durda via AP)

Astronomers may have found the first moon outside our solar system, a gas behemoth the size of Neptune. Plenty of planets exist beyond our solar system, but a moon around one of those worlds has yet to be confirmed. Two Columbia University researchers presented their tantalising evidence for a moon.

The potential moon would be considerably larger than Earth — about the size of Neptune or Uranus. The planet it orbits is as big as mammoth Jupiter. This apparent super-size pairing of a gaseous moon and planet is 8,000 light-years away.

Researchers Alex Teachey and David Kipping evaluated 284 planets outside our solar system that had already been discovered by NASA’s Kepler Space Telescope. Only one planet held promise for hosting a moon, one around the star known as Kepler-1625, which is about the size of our sun but older.

So last October, the pair directed the Hubble Space Telescope at the star in an attempt to verify — or rule out — the possibility of a moon orbiting the planet Kepler-1625b. They were on the lookout for a second temporary dimming of starlight. The main dip in stellar brightness would be the planet itself crossing in front of its star. Another dip could well be a moon — known as an exomoon outside our solar system.

The more powerful and precise Hubble telescope detected a second and smaller decrease in starlight 3 ½ hours after the planet passed in front of the star — “like a dog following its owner on a leash,” as Kipping put it. The observation period, however, ended before the moon could complete its transit. That’s why the astronomers need another look with Hubble, hopefully, next spring.

Despite the evidence, Teachey stressed, “we are urging caution here.”

“The first exomoon is obviously an extraordinary claim and it requires extraordinary evidence,” Teachey said. “Furthermore, the size we’ve calculated for this moon, about the size of Neptune, has hardly been anticipated and so that, too, is reason to be careful here.”

He added: “We’re not cracking open Champagne bottles just yet on this one.”

If indeed a moon, it would be about 2 million miles (3 million kilometres) from its planet and appear twice as big in its sky, as the moon does in ours. The astronomers are uncertain how this potential moon might have formed, given its size.

“If confirmed, this finding could completely shake up our understanding of how moons are formed and what they can be made of,” NASA’s science mission chief Thomas Zurbuchen said in a statement.

According to the researchers, another compelling piece of evidence in favour of a moon is that the planet passed in front of its star more than an hour earlier than predicted. A moon could cause that kind of an uncertain, wobbly path, they noted.

Kipping said that’s how the Earth and moon would appear from far away. This particular planet — or exoplanet — is about the same distance from its star as Earth is to the sun. Another planet could cause the same gravitational nudge, the researchers noted, although Kepler observations have come up empty in that regard. Kepler-1625b is the only planet found so far around this star. For Teachey and Kipping, the best and simplest explanation is that Kepler-1625b has a moon.

“We’ve tried our best to rule out other possibilities,” Kipping told reporters. “But we were unable to find any other single hypothesis which can explain all of the data we have.”

Their findings were published in the journal Science Advances. The journal’s deputy editor, Kip Hodges, praised the researchers for their cautious tone, given the difficult and complicated process of identifying an exomoon.

“If this finding stands up to further observational scrutiny, it represents a major milestone in the field of astronomy,” Hodges said.

The Columbia astronomers said they may be able to clinch this as early as next year, with more Hubble viewing. In the meantime, they’re encouraging other scientists to join in and embracing the scrutiny that’s sure to come.

Given that both the planet and its potential moon are gas giants, no one is suggesting conditions that might support life. “But going forward, I think we’re opening the doors to finding worlds like that,” Teachey said.