Rare, short bursts of cosmic radio waves detected 10 years ago may have come from three billion light years away. 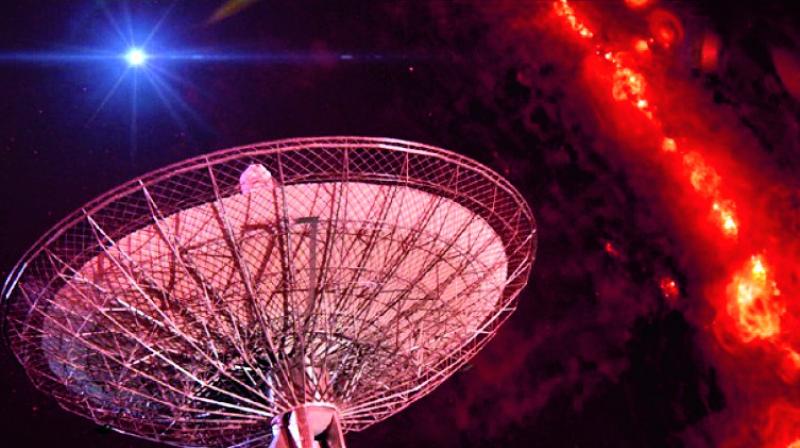 The dwarf galaxy from which the ‘alien’ cosmic waves may have originated is over three billion light years from Earth.

Washington: Rare, short bursts of ‘alien’ cosmic radio waves that puzzled astronomers since there detection nearly 10 years ago may have originated from a dwarf galaxy more than three billion light years from Earth, scientists, including one of Indian origin, have found. Fast radio bursts, which flash for just a few milliseconds, created a stir among astronomers because they seemed to be coming from outside our galaxy, which means they would have to be very powerful. A repeating burst was discovered in 2012, providing a chance for researchers to monitor its area of the sky with the Very Large Array (VLA) in New Mexico and  Puerto Rico.

The VLA last year detected a total of nine bursts over a period of a month, sufficient to locate it within a tenth of an arcsecond. Larger European and American radio interferometer arrays pinpointed it to within one-hundredth of an arcsecond, within a region about 100 light years in diameter. Deep imaging of that region by the Gemini North Telescope in Hawaii turned up an optically faint dwarf galaxy that the VLA subsequently discovered also continuously emits low-level radio waves, typical of a galaxy with an active nucleus, indicating a central supermassive black hole.

The galaxy has a low abundance of elements. The origin of a FRB in this type of dwarf galaxy suggests a connection to other energetic events similar dwarf galaxies, said Casey Law, an astronomer  at University of California, Berkeley. Extremely bright exploding stars, called superluminous supernovae and long gamma ray bursts also occur in this type of galaxy, he said. Both are hypothesised to be associated with massive, highly magnetic and rapidly rotating neutron stars called magnetars.

Neutron stars are dense, compact objects created in supernova explosions, seen mostly as pulsars, because they emit periodic radio pulses as they spin. “All these threads point to the idea that in this environment, something generates these magnetars,” Mr Law said. “It could be created by a superluminous supernova or a long gamma ray burst, and then later on, as it evolves and its rotation slows down a bit, it produces these fast radio bursts as well as continuous radio emission powered by that spindown.” “Finding the host galaxy of this FRB, and its distance, is a big step forward, but we still have much more to do,” said team leader Shami Chatterjee of Cornell University.