The craft has an unusual design, comprising a "stacked aircraft" carrying two orbiters -- one European, the other Japanese. 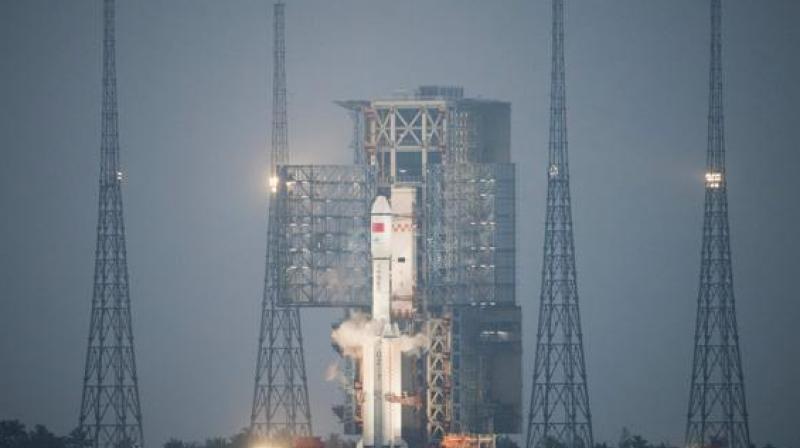 European and Japanese scientists Thursday proudly unveiled the BepiColombo spacecraft ahead of its seven-year journey to Mercury, to explore one of the Solar System's most enigmatic planets.

Set for launch in 2018, BepiColombo will be the European Space Agency's (ESA) first mission to the closest rock to the Sun. The craft has an unusual design, comprising a "stacked aircraft" carrying two orbiters -- one European, the other Japanese -- which will separate on arrival to go into different, but complementary orbits around Mercury.

BepiColombo aims to "follow up on many of the intriguing results of NASA's Messenger mission, probing deeper into Mercury's mysteries than ever before," the ESA said.

The joint project with the Japanese agency JAXA, which has cost more than 1.3 billion euros ($1.48 billion), involves some 33 companies from 12 EU nations, as well as firms from the US and Japan.

It has been delayed several times, but the mission chiefs are now confident that it is on track to launch in October next year. Mercury is the "most peculiar of all rocky planets," Alvaro Gimenez, ESA's director of science told reporters at the agency's centre in the Dutch coastal town of Noordwijk.

It also has a magnetic field, the only rocky planet besides Earth to have one. But Mercury is so weak that the field does not provide a shield against solar radiation. It orbits just 58 million kilometres (36 million miles) from the Sun, and its surface is blasted by radiation levels that would destroy earthly lifeforms.

Its proximity to the Sun also makes Mercury hard to study from Earth because the brightness impedes the view. The Sun's huge gravity also makes it difficult to put a craft into steady orbit around the planet.

The high temperatures also presented tricky challenges for the engineers, which include the European aircraft designer Airbus, and added to project delays, mission chiefs said.

Airbus said it has covered the European orbiter with specially-designed "high-temperature multi-layered insulation" which is "made up of 50 layers of ceramics and aluminium,"  while the antennae are "made of heat-resistant titanium, covered by a newly-developed coating".

"We are flying into a pizza oven which is why we had to test materials at a very high and different temperature rates. Sometimes with very unwanted results," said Ulrich Reininghaus, the ESA BepiColombo project manager.

So far only two NASA missions have visited Mercury -- Mariner 10 in the 1970s and Messenger, which orbited the planet from 2011 until it ran out of fuel in April 2015.

BepiColombo will study the peculiarities of Mercury's internal structure and magnetic field generation, and how it interacts with the Sun and solar wind. The Mercury mission is Europe's "most complicated ever," said Gimenez.