With liftoff, the Heavy became the most powerful rocket in use today, doubling the liftoff punch of its closest competitor. 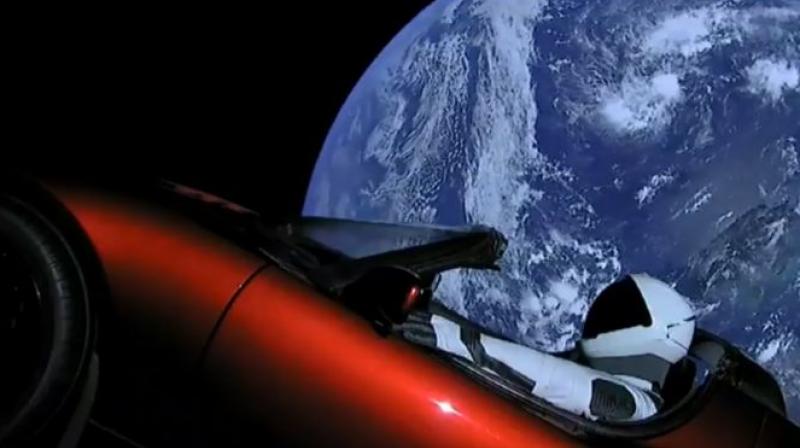 A Falcon 9 SpaceX heavy rocket lifts off from pad 39A at the Kennedy Space Center in Cape Canaveral. The Falcon Heavy, has three first-stage boosters, strapped together with 27 engines in all.

SpaceX’s big new rocket blasted off on its first test flight, carrying a red sports car aiming for an endless road trip past Mars. The Falcon Heavy rose from the same launch pad used by NASA nearly 50 years ago to send men to the moon. With liftoff, the Heavy became the most powerful rocket in use today, doubling the liftoff punch of its closest competitor.

The three boosters and 27 engines roared to life at Kennedy Space Center, as thousands watched from surrounding beaches, bridges and roads, jamming the highways in scenes unmatched since NASA’s last space shuttle flight. At SpaceX Mission Control in Southern California, employees screamed, whistled and raised pumped fists into the air as the launch commentators called off each milestone. Millions more watched online, making it the second biggest live stream in YouTube history.

Two of the boosters— both recycled from previous launches — returned minutes later for simultaneous, side-by-side touchdowns on land at Cape Canaveral. Sonic booms rumbled across the region with the vertical landings 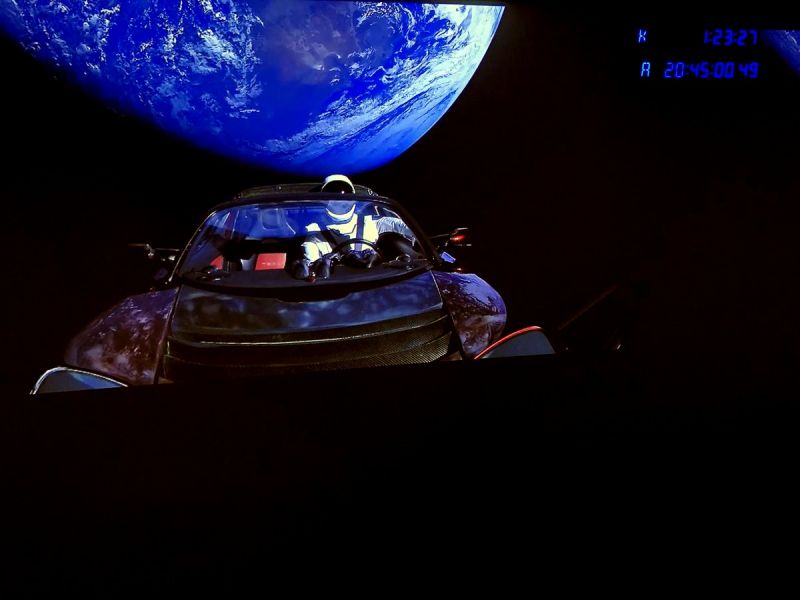 A few hours later, SpaceX chief executive Elon Musk told reporters that the third booster, brand new, slammed into the Atlantic at 300mph and missed the floating landing platform, scattering shrapnel all over the deck and knocking out two engines. He was unfazed by the lost booster and said watching the other two land upright probably was the most exciting thing he’s ever seen.

Before liftoff, “I had this image of just a giant explosion on the pad, a wheel bouncing down the road, the Tesla logo landing somewhere,” he said. “But fortunately, that’s not what happened.”

Musk owns the rocketing Tesla Roadster, which is shooting for a solar orbit that will reach all the way to Mars. As head of the electric carmaker Tesla, he combined his passions to add a dramatic flair to the Heavy’s long-awaited inaugural flight. Ballast for a rocket debut is usually concrete or steel slabs, or experiments.

Cameras mounted on the car fed stunning video of the convertible floating high above the ocean with its driver, a space-suited mannequin, named “Starman” after the Davie Bowie song. A sign on the dashboard read: “Don’t panic!” Bowie’s “Life on Mars?” played in the background at one point.

“View from SpaceX Launch Control,” Musk wrote via Twitter. “Apparently, there is a car in orbit around Earth.”

Minutes later, he provided a live stream of “Starman” tooling around the blue home planet, looking something like a NASCAR racer out for a Sunday drive, with its right hand on the wheel and the left arm resting on the car’s door.

On the eve of the flight, Musk told reporters the company had done all it could to maximize success and he was at peace with whatever happens: success, “one big boom” or some other calamity. Musk has plenty of experience with rocket accidents, from his original Falcon 1 test flights to his follow-up Falcon 9s, one of which exploded on a nearby pad during a 2016 ignition test.

The Falcon Heavy is a combination of three Falcon 9s, the rocket that the company uses to ship supplies to the International Space Station and lift satellites. SpaceX is reusing first-stage boosters to save on launch costs. Most other rocket makers discard their spent boosters in the ocean. 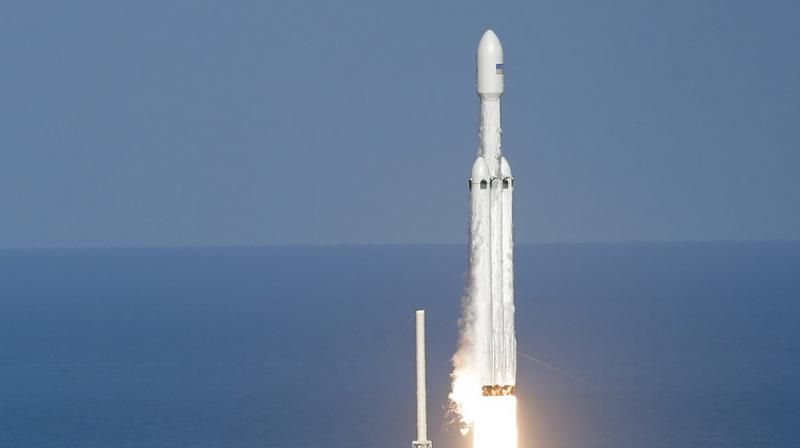 Unlike most rockets out there, the Falcon Heavy receives no government funding. The hulking rocket is intended for massive satellites, like those used by the US military and major-league communication companies. Even before the successful test flight, customers were signed up.

“It was awesome like a science fiction movie coming to reality,” said former NASA deputy administrator Dava Newman, Massachusetts Institute of Technology’s Apollo professor of astronautics. “They nailed it. Good for them.”

Given the high stakes and high drama, Tuesday’s launch attracted huge crowds not seen since NASA’s final space shuttle flight seven years ago. While the shuttles had more liftoff muscle than the Heavy, the all-time leaders in both size and might were NASA’s Saturn V rockets, which first flew astronauts to the moon in 1968.

Not counting Apollo moon buggies, the Roadster is the first automobile to speed right off the planet. The car faces considerable speed bumps before settling into its intended orbit around the sun, an oval circle stretching from the orbit of Earth on one end to the orbit of Mars on the other. It has to endure a cosmic bombardment during several hours of cruising through the highly charged Van Allen radiation belts encircling Earth. Finally, a thruster has to fire to put the car on the right orbital course.

If it weathers all this, the Roadster will reach the vicinity of Mars in six months, Musk said. The car could be travelling between Earth and Mars’ neighbourhoods for a billion years, according to the high-tech billionaire.

Musk acknowledged the Roadster could come “quite close” to Mars during its epic cruise, with only a remote chance of crashing into the red planet. Also on board in a protected storage unit is Isaac Asimov’s science fiction series, “Foundation.” A plaque contains the names of the more than 6,000 SpaceX employees.

The Heavy already is rattling the launch market. Its sticker price is $90 million, less than one-tenth the estimated cost of NASA’s Space Launch System megarocket in development for moon and Mars expeditions.

SpaceX has decided against flying passengers on the Heavy, Musk told reporters Monday, and instead will accelerate development of an even bigger rocket to accommodate deep-space crews. His ultimate goal is to establish a city on Mars.

“If people think we’re in a race with the Chinese, this is our secret weapon: the entrepreneurship of people like Elon and others like Jeff Bezos,” said Stanford University’s G. Scott Hubbard, NASA’s first Mars czar.