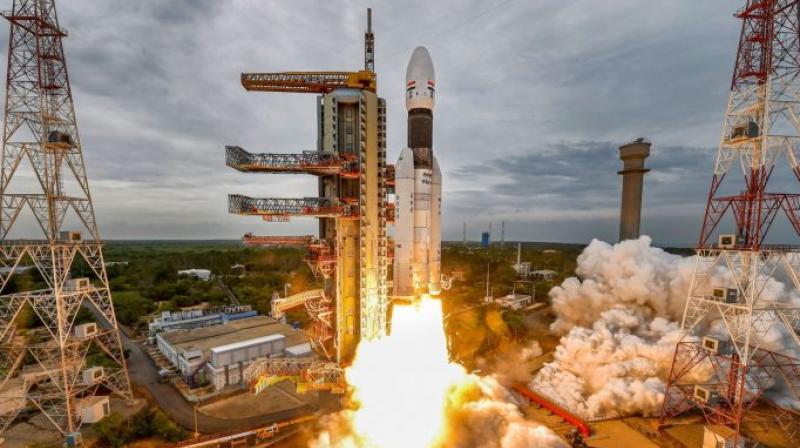 Chandrayaan-II was the first attempt to send a rover to the south pole of the moon. (Photo: PTI/File)

Bengaluru: The Chandra's Atmospheric Composition Explorer-2 (CHACE-2), a quadrupole mass spectrometer onboard Chandrayaan-2 mission, has made the first-of-its-kind observations of the global distribution of Argon-40 in the tenuous lunar exosphere, according to the Indian Space Research Organisation.

These observations provide insight on the dynamics of the lunar exospheric species, as well as on the radiogenic activities in the first few tens of metres below the lunar surface, the Bengaluru-headquartered space agency said in a statement on Tuesday.

'Exosphere' is the outermost region of the upper atmosphere of a celestial body where the constituent atoms and molecules rarely collide with each other and can escape into space.

Earth's Moon features a surface-boundary-exosphere. For Moon, different constituents in the exosphere are fed from the surface by a variety of processes, such as thermal desorption, solar wind sputtering, photo-stimulated desorption, and micrometeorite impact vaporisation.

The exospheric atoms may be lost to space by the thermal escape (also known as the Jean's escape). Also, the atoms get ionised by photo-ionisation and charge exchange with the solar wind ions. Subsequently, they can be swept away by the convective electric field of the solar wind. Some of these atoms/ions can also be deposited back on the lunar surface. Thus, the lunar exosphere exists as a result of a dynamic equilibrium between several source and sink processes.

Noble gases serve as important tracers to understand the processes of surface-exosphere interaction, and Argon-40 (Ar-40) is such an important tracer atom to study the dynamics of the lunar exospheric species, the statement said.

Ar-40 originates from the radioactive disintegration of Potassium-40 (K-40) present below the lunar surface. Once formed, it diffuses through the inter-granular space and makes way up to the lunar exosphere through seepages and faults.

The CHACE-2 observations provide the diurnal and spatial variation of Ar-40 covering the equatorial and mid latitude regions of the Moon, according to ISRO.

"The uniqueness of this result from Chandrayaan-2 mission lies in the fact that although Apollo-17 and LADEE missions have detected the presence of Ar-40 in the lunar exosphere, the measurements were confined to the near-equatorial region of the Moon", it said.

"As there is a steep latitudinal temperature gradient of the lunar surface, it was, so far, a gap area to study the global dynamics of the lunar exospheric species, which is a temperature-driven process. In this context, the observations by CHACE-2 onboard Chandrayaan-2 orbiter on Ar-40 up to the mid-latitude regions (-60º to +60º) play a significant role to bridge the gap in the knowledge", the space agency said.

CHACE-2 observations reveal an increase in the number density of Ar-40 near the sunrise terminator, a decrease through the dayside, a secondary peak near sunset terminator and a night-side minima. This is the typical behaviour of a condensable gas, it was stated.

For the mid latitude regions, CHACE-2 observations showed for the first time that the variation in the number density of Ar-40 with respect to solar longitudes are similar to that of low latitude regions, despite the differences in temperature and topography.

Further, the CHACE-2 observations reveal that the distribution in Ar-40 has significant spatial heterogeneity. There are localised enhancements (termed as Argon bulge) over several regions including the KREEP (potassium (K), rare-earth elements, and phosphorus (P)) and South Pole Aitken terrain.

The observations of Argon bulge by CHACE-2 are indicative of unknown or additional loss processes, Moon quakes or regions with lower activation energies, which call for a better understanding of the surface-exosphere interactions and source distributions of Ar-40, the statement said.

CHACE-2 was a sequel to the CHACE experiment on the Moon Impact Probe (MIP) of Chandrayaan-1 mission and also draws heritage from the Mars Exospheric Neutral Composition Analyser (MENCA) experiment aboard the Indian Mars Orbiter Mission, it was noted.