Scientists have confirmed one of Albert Einstein's century-old theories by witnessing it with the Hubble Space Telescope. 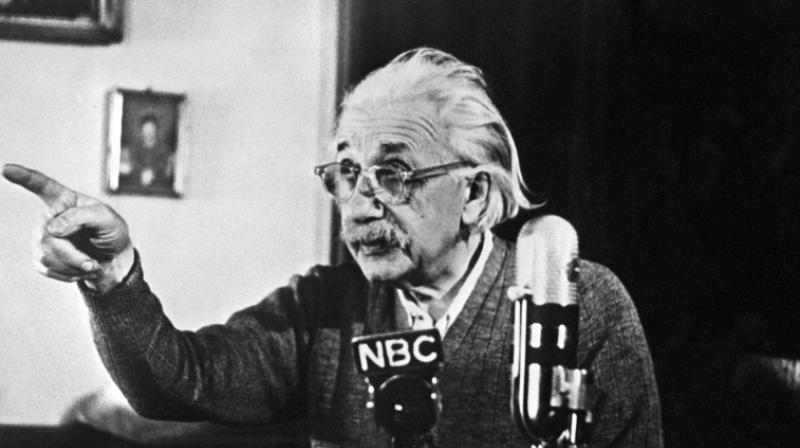 Scientists have confirmed one of Albert Einstein's century-old theories by witnessing with the Hubble Space Telescope a phenomenon he thought would never be possible to see, researchers said Wednesday.

Astronomers have now glimpsed for the first time a distant star's light bending and revealing its mass when an object passes in front of it, known as "gravitational microlensing," said the report in the journal Science.

"Einstein would be proud. One of his key predictions has passed a very rigorous observational test," wrote Terry Oswalt of Embry-Riddle Aeronautical University, in an accompanying Perspective article in Science.

This gravitational microlensing was seen in 1919, when starlight curved around a total eclipse of the Sun.

At the time, the discovery offered some of the first convincing proof for Einstein's theory of general relativity -- a law of physics that describes gravity as a geometric function of both space and time.

"When a star in the foreground passes exactly between us and a background star, gravitational microlensing results in a perfectly circular ring of light -- a so-called 'Einstein ring,'" said Oswalt.

But Einstein believed it would not be possible to see the phenomenon with stars other than our Sun.

In a 1936 article in the journal Science, he wrote that because stars are so far apart "there is no hope of observing this phenomenon directly."

Of course, Einstein could not have predicted the Hubble Space Telescope would be launched in 2009 and offer unprecedented views of faraway stars and planets.

Fossil of a star

Using this NASA telescope, an international research team directed by Kailash C. Sahu of the Space Telescope Science Institute in Baltimore, Maryland, focused on a distant star as its light was deflected around a nearby white dwarf star called Stein 2051 B.

A white dwarf is the remnant of a star that has completed its hydrogen-burning life cycle, and is a fossil of the prior generations of stars in our galaxy.

Stein 2051 B is the sixth-closest white dwarf star to the Sun, and researchers discovered it has a mass about two-thirds that of the Sun.

The deflection of the background star's light is directly related to the mass and gravity of the white dwarf.

Sahu and colleagues saw the two objects were slightly out of alignment, and an asymmetrical version of an Einstein ring formed, allowing the mass to be calculated.

"This part of Einstein's prediction is called 'astrometric lensing' and Sahu's team was the first to observe it in a star other than the Sun," said Oswalt.

He said the finding is important because it "provides a new tool for determining the masses of objects we can't easily measure by other means," and opens a new window to understanding "the history and evolution of galaxies such as our own."