New Horizons spacecraft may have two targets this time

Could the next flyby target for NASA’s New Horizons spacecraft actually be two targets? 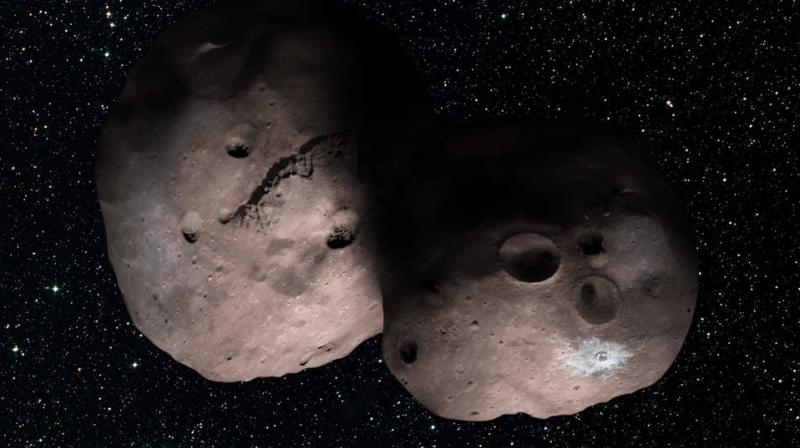 One artist’s concept of Kuiper Belt object 2014 MU69, the next flyby target for NASA’s New Horizons mission. This binary concept is based on telescope observations made at Patagonia, Argentina on July 17, 2017 when MU69 passed in front of a star. New Horizons theorize that it could be a single body with a large chunk taken out of it, or two bodies that are close together or even touching. (Credits: NASA/JHUAPL/SwRI/Alex Parker)

New Horizons scientists look to answer that question as they sort through new data gathered on the distant Kuiper Belt object (KBO) 2014 MU69, which the spacecraft will fly past on Jan. 1, 2019. That flyby will be the most distant in the history of space exploration, a billion miles beyond Pluto.

The ancient KBO, which is more than four billion miles (6.5 billion kilometers) from Earth, passed in front of a star on July 17, 2017. A handful of telescopes deployed by the New Horizons team in a remote part of Patagonia, Argentina were in the right place at the right time to catch its fleeting shadow — an event known as an occultation – and were able to capture important data to help mission flyby planners better determine the spacecraft trajectory and understand the size, shape, orbit and environment around MU69.

Based on these new occultation observations, team members say MU69 may not be not a lone spherical object, but suspect it could be an “extreme prolate spheroid” – think of a skinny football – or even a binary pair. The odd shape has scientists thinking two bodies may be orbiting very close together or even touching – what’s known as a close or contact binary – or perhaps they’re observing a single body with a large chunk taken out of it. The size of MU69 or its components also can be determined from these data. It appears to be no more than 20 miles (30 kilometers) long, or, if a binary, each about 9-12 miles (15-20 kilometers) in diameter.

“This new finding is simply spectacular. The shape of MU69 is truly provocative, and could mean another first for New Horizons going to a binary object in the Kuiper Belt,” said Alan Stern, mission principal investigator from the Southwest Research Institute (SwRI) in Boulder, Colorado. “I could not be happier with the occultation results, which promise a scientific bonanza for the flyby.”

The July 17 stellar occultation event that gathered these data was the third of a historic set of three ambitious occultation observations for New Horizons. The team used data from the Hubble Space Telescope and European Space Agency’s Gaia satellite to calculate and pinpoint where MU69 would cast a shadow on Earth's surface. “Both of these space satellites were crucial to the success of the entire occultation campaign,” added Stern.

Said Marc Buie, the New Horizons co-investigator who led the observation campaign, "These exciting and puzzling results have already been key for our mission planning, but also add to the mysteries surrounding this target leading into the New Horizons encounter with MU69, now less than 17 months away.”