The study found that virus was inactivated more rapidly on skin surfaces than on other surfaces such as stainless steel, glass and plastic 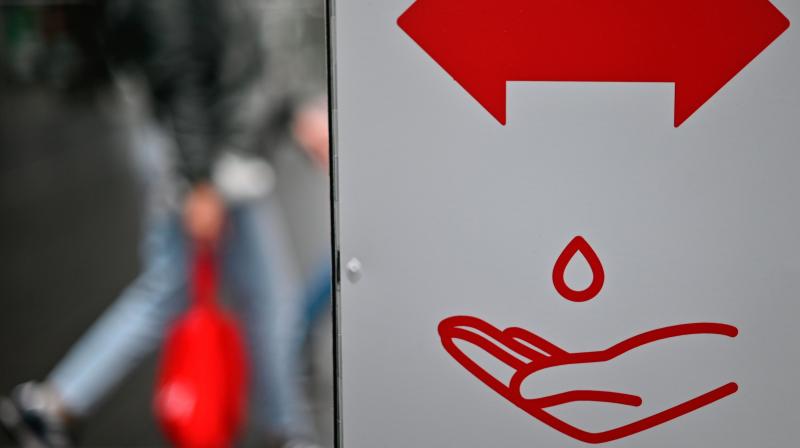 A person walks past a board advising on hand disinfection facilities in a public place in Berlin on October 6, 2020, amid the new coronavirus COVID-19 pandemic. (AFP)

New Delhi: The SARS-CoV-2 virus, which causes COVID-19, may linger on human skin for nine hours, much longer than the flu viruses can, according to a study.

The influenza A virus (IAV), in contrast, remained viable on human skin for nearly two hours, said the researchers including those from Kyoto Prefectural University of Medicine in Japan.

The study, published in the journal Clinical Infectious Diseases, found that both the viruses were rapidly inactivated on skin with a hand sanitiser.

The finding underscores the importance of hand washing or using a sanitiser to prevent the spread of COVID-19.

The researchers noted that the stability of SARS-CoV-2 on human skin remains unknown, considering the hazards of viral exposure to humans.

"We generated a model that allows the safe reproduction of clinical studies on the application of pathogens to human skin and elucidated the stability of SARS-CoV-2 on the human skin," the researchers wrote in the journal

They evaluated the stability of SARS-CoV-2 and IAV, mixed with culture medium or upper respiratory mucus, on human skin surfaces.

The researchers also evaluated the disinfection effectiveness on skin of 80 per cent ethanol against SARS-CoV-2 and IAV.

The study found that SARS-CoV-2 and IAV were inactivated more rapidly on skin surfaces than on other surfaces such as stainless steel, glass and plastic.

The survival time was significantly longer -- 9 hours -- for SARS-CoV-2 than for IAV (1.82 hours), according to the researchers.

"The nine hour survival of SARS-CoV-2 on human skin may increase the risk of contact transmission in comparison with IAV, thus accelerating the pandemic," the researchers wrote in the journal.

"Proper hand hygiene is important to prevent the spread of SARS-CoV-2 infections," they said.

Pfizer vaccine may protect against new mutations of coronavirus