The Alaska Volcano Observatory has tools to predict eruptions. 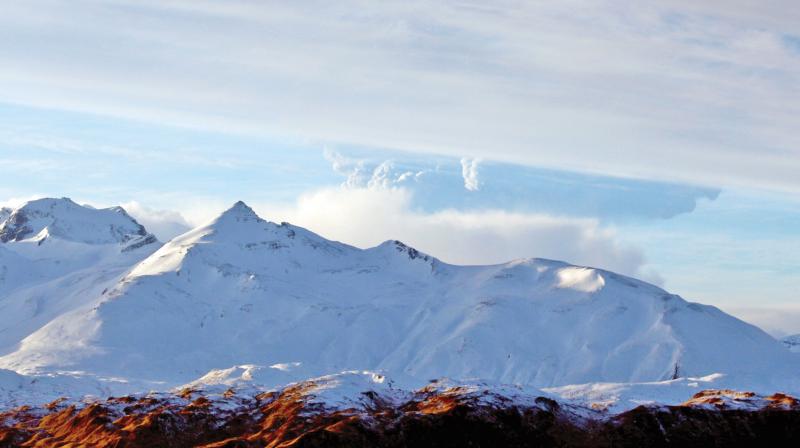 This photo taken December 21, 2016 shows the Bogoslof Volcano erupting in the Aleutian Islands, Alaska. The active Alaska volcano, which has erupted 10 times since mid-December and is located about 850 miles southwest of Anchorage, erupted again on January 5, 2017, this time sending a cloud of ash and ice 35,000 feet in the air. (Photo:AP)

Anchorage, Alaska: A remote volcano in Alaska’s Aleutian Islands has erupted 10 times in less than a month, and experts say more eruptions are possible.

Bogoslof volcano has sent up ash clouds that have reached as high as 35,000 feet. Here are answers to questions on why volcanoes in Alaska erupt so often and the dangers they present:

How many volcanoes are in Alaska?
The Alaska Volcano Observatory, a joint program of the US Geological Survey and the University of Alaska Fairbanks, says 90 volcanoes have been active within the last 10,000 years — and could erupt again. More than 50 have been active since about 1760, when record-keeping begin.

Like Bogoslof, most are on the 1,550-mile-long Aleutian Arc, which forms the northern portion of the Pacific “Ring of Fire,” a horseshoe shape zone around the Pacific Ocean of frequent earthquakes and volcanic eruptions triggered by the subduction of an oceanic plate beneath continental plates.

How often do Alaska volcanoes erupt?
Regularly. Pavlof Volcano sent up ash clouds in 2013. Cleveland volcano blew in December 2011. Redoubt volcano 100 miles southwest of Anchorage blew in March 2009, dropping ash during the medals ceremony for the US alpine ski championships at Alyeska Resort in Girdwood. Some volcanoes erupt and spit out additional ash intermittently for weeks, as Bogoslof seems to be doing.

The Alaska Volcano Observatory, formed in response to the 1986 eruption of Mount Augustine, has tools to predict eruptions. As magma moves beneath a volcano before an eruption, it often generates earthquakes, swells the surface of a mountain and increases the gases emitted. The observatory samples gases, measures earthquake activity and watches for landscape deformities.

The observatory uses mathematical models to forecast how fast ash particles will be transported in the atmosphere and where ash could fall. The observatory runs the models when it detects that a volcano might erupt, and updates them when they blow.

Why are Alaska volcanoes dangerous?
Volcanoes in Hawaii ooze lava. Volcanoes in Alaska tend to explode.

Instead of a red river of lava, Alaska volcanoes typically shoot ash up to 50,000 feet, or more than nine miles, into the jet stream.

That ash is not the kind you left after a campfire. Instead, it’s an abrasive kind of rock fragment. The particulate has jagged edges and has been used as an industrial abrasive to polish metals.

Particulate can injure skin, eyes and breathing passages. The young, the elderly and people with respiratory problems are especially susceptible. Ash under a windshield wiper can scratch glass. However, most volcanoes are far from communities and ash fall requiring breathing masks or new air filters on a car is infrequent.

What does it do to aircraft?
USGS geophysicist John Power once likened flying through an ash cloud to flying into a sandblaster.

Ash can scrape the moving parts of jet engines such as turbine blades. However, ash on hot parts of a jet engine is potentially more dangerous, according to the observatory.

The engines operate near the melting temperature of volcanic ash.

“Ingestion of ash can clog fuel nozzles, combustor, and turbine parts causing surging, flame out, immediate loss of engine thrust, and engine failure,” according to the observatory.

If the volcanoes are in remote locations, how dangerous can they be?
Using information provided by the Federal Aviation Administration, the observatory estimates that more than 80,000 large aircraft per year, and 30,000 people per day, fly on routes downwind of Aleutian volcanoes, which are along great-circle routes between Europe, North America and Asia.

Airlines get excited when an ash cloud rises above 20,000 feet.

The jet stream can carry ash for hundreds of miles. Ash from Kasatochi Volcano in August 2008 blew all the way to Montana.

Redoubt volcano blew on December 15, 1989, and sent ash 150 miles away into the path of a KLM jet carrying 231 passengers. Its four engines flamed out.

As the crew tried to restart the engines, “smoke” and a strong odor of sulfur filled the cockpit and cabin, according to a USGS account.

The jet dropped more than two miles, from 27,900 feet to 13,300 feet, before the crew was able to restart all engines and land the plane safely at Anchorage.

What are the chances for a major, catastrophic eruption?
“That’s always a possibility but big eruptions have precursor signals,” said USGS research geophysicist Chris Waythomas, “That just doesn’t happen in 20 minutes.”

Months of below-ground unrest can precede a major eruption. The Alaska Volcano Observatory, Waythomas said, likely would be tipped off by movement of the huge volume of magma involved.

“It has to break a lot of rock to get to the surface,” he said.