Black holes are monstrous celestial entities exerting gravitational fields so vicious that no matter or light can escape. 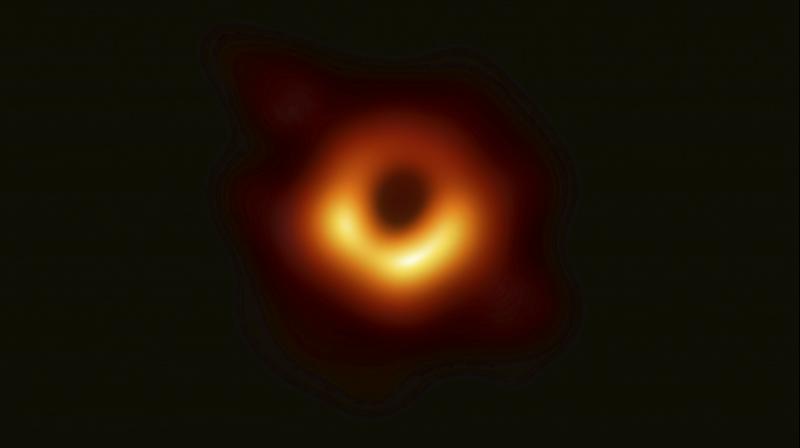 the observed shadow of M87 is roughly 2-1/2 times larger than the actual size of the black hole’s boundary. (Photo: AP)

Using a global network of telescopes to see “the unseeable,” an international scientific team on Wednesday announced a milestone in astrophysics - the first-ever photo of a black hole - in an achievement that validated a pillar of science put forward by Albert Einstein more than a century ago. Black holes are monstrous celestial entities exerting gravitational fields so vicious that no matter or light can escape. The somewhat fuzzy photo of the black hole at the centre of Messier 87, or M87, a massive galaxy residing in the centre of the relatively nearby Virgo galaxy cluster, shows a glowing ring of red, yellow and white surrounding a dark centre.

The research was conducted by the Event Horizon Telescope (EHT) project, an international collaboration involving about 200 scientists begun in 2012 to try to directly observe the immediate environment of a black hole. The announcement was made in simultaneous news conferences in Washington, Brussels, Santiago, Shanghai, Taipei and Tokyo.

The image was obtained using data collected in April 2017 from eight radio telescopes in six locations that essentially create a planet-sized observational dish.

The team’s observations strongly validated the theory of general relativity proposed in 1915 by Einstein, the famed theoretical physicist, to explain the laws of gravity and their relation to other natural forces.

“We have achieved something presumed to be impossible just a generation ago,” said astrophysicist Sheperd Doeleman, director of the Event Horizon Telescope at the Center for Astrophysics (CfA), Harvard & Smithsonian.

Black holes, phenomenally dense and come in various sizes, are extraordinarily difficult to observe by their very nature. A black hole’s event horizon is the point of no return beyond which anything - stars, planets, gas, dust and all forms of electromagnetic radiation - gets swallowed into oblivion.

The M87 black hole observed by the scientific team resides about 54 million light-years from Earth and boasts an almost-unimaginable mass of 6.5 billion times that of the sun. A light year is the distance light travels in a year, 5.9 trillion miles (9.5 trillion km).

“This is a huge day in astrophysics,” said US National Science Foundation Director France Cordova. “We’re seeing the unseeable.”

“It did bring tears to my eyes,” Cordova added.

The existence of black holes was first predicted in 1916. Most galaxies are thought to have a supermassive black hole at their centre.

The fact that black holes do not allow light to escape makes viewing them difficult. The scientists looked for a ring of light - super-heated disrupted matter and radiation circling at tremendous speed at the edge of the event horizon - around a region of darkness representing the actual black hole. This is known as the black hole’s shadow or silhouette.

The scientists said Einstein’s theory correctly predicted that the shape of the shadow would be almost a perfect circle. With M87, it deviated from perfect circularity by less than 10 per cent.

“We found literally the proverbial hole in the middle of this galaxy, and to me, that is just stunning,” said astrophysicist Dimitrios Psaltis of the University of Arizona, the EHT project scientist.

Einstein’s theory also was validated by another major astrophysics achievement announced in 2016, the detection of gravitational waves, or ripples in spacetime, arising from two black holes that smashed together.

“The image has this exquisite beauty in its simplicity,” said CfA astrophysicist Michael Johnson, the project’s imaging coordinator. “It is just a fundamental statement about nature. It’s a really moving demonstration of just what humanity is capable of.”

The project has also targeted another black hole - Sagittarius A* - situated at the centre of our own Milky Way galaxy. Scientists expressed optimism about getting a picture of that one, perhaps within a year. Sagittarius A* possesses 4 million times the mass of our sun and is located 26,000 light-years from Earth.

Streaming away from M87 at nearly the speed of light is a humongous jet of subatomic particles, though that was not captured in the photo.

The researchers estimated that the observed shadow of M87 is roughly 2-1/2 times larger than the actual size of the black hole’s boundary - the event horizon - due to light bending because of the extreme gravitational forces. They think the event horizon measures just under 25 billion miles (40 billion km) across, about three times the size of Pluto’s orbit around the sun.

The project’s researchers obtained the data using radio telescopes in the US states of Arizona and Hawaii as well as in Mexico, Chile, Spain and Antarctica. Since then, telescopes in France and Greenland have been added to the global network.