The Polar Satellite Launch Vehicle (PSLV-C52) lifted off at 5.59 am from the first launch pad at Satish Dhawan Space Centre, Sriharikota 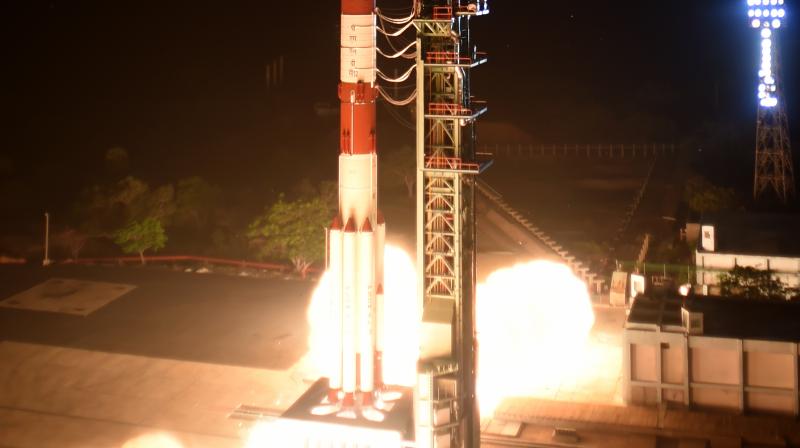 After the launch, ISRO Chairman, Dr Somanath announced that the mission is successful and congratulated the entire ISRO team (ISRO)

The Polar Satellite Launch Vehicle (PSLV-C52) lifted off at 5.59 am from the first launch pad at Satish Dhawan Space Centre, SHAR, Sriharikota.

This was the 80th launch vehicle mission from SDSC SHAR, Sriharikota; 54th flight of PSLV; and the 23rd flight of PSLV in XL configuration (6 strap-on motors).

The satellite EOS-04 is realised at U R Rao Satellite Centre, Bengaluru.

It is a Radar Imaging Satellite designed to provide high-quality images under all weather conditions for applications such as agriculture, forestry and plantations, soil moisture & hydrology, and flood mapping.

After the launch, a beaming ISRO Chairman, Dr Somanath announced that the mission is successful and congratulated the entire ISRO team for the accomplishment.

Regarding the the two co-passenger pay loads, INS-2TD weighing 17.5 kg is a technology demonstrator satellite from ISRO, which is a precursor to the India-Bhutan joint satellite (INS-2B).

Having a thermal imaging camera as its payload, the satellite benefits the assessment of land surface temperature; water surface temperature of wetlands/lakes; delineation of vegetation (crops and forest); and thermal inertia (day/night). The mission life of the INS-2TD is 6 months.

The 8.1 kg weighing INSPIREsat-1, is a student satellite developed by the Indian Institute of Space Sciences & Technology (IIST), in association with the University of Colorado, USA.

Other contributors are NTU, Singapore, and NCU, Taiwan. Two scientific payloads improve the understanding of ionosphere dynamics and the sun’s coronal hearing processers. The life span of the satellite is 1 year.