The Chandrayaan-2 spacecraft is expected to reach the moon's orbit on August 20 and land on lunar surface on September 7. 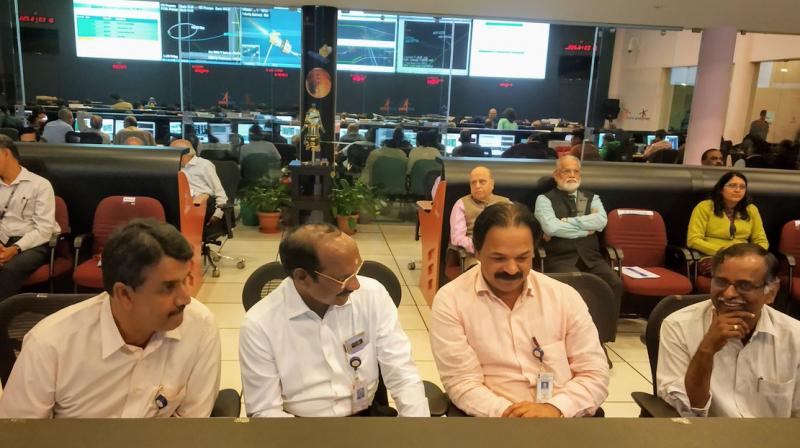 Bengaluru: India's second moon mission 'Chandrayaan-2' left the earth's orbit early on Wednesday, 23 days after being launched, and is moving towards the moon following the successful completion of a crucial manoeuvre by the Indian Space Research Organisation (ISRO).

The Bengaluru-headquartered space agency said it has carried out a manoeuvre called 'Trans Lunar Insertion' (TLI) at 2:21 am on Wednesday, following which the spacecraft has successfully entered the Lunar Transfer Trajectory.

The Chandrayaan-2 spacecraft is expected to reach the moon's orbit on August 20 and land on lunar surface on September 7. "Today (August 14, 2019) after the Trans Lunar Insertion (TLI) maneuver operation, #Chandrayaan2 will depart from Earth's orbit and move towards the Moon (sic)," the ISRO tweeted. "During the final orbit raising of the spacecraft around the earth, the liquid engine was fired for about 1203 seconds. With this, Chandrayaan-2 entered the Lunar Transfer Trajectory," the space agency said.

Earlier, the spacecraft's orbit was progressively increased five times between July 23 and August 6. The health of the spacecraft is being "continuously monitored" from the Mission Operations Complex (MOX) at ISRO Telemetry Tracking and Command Network (ISTRAC) with support from Indian Deep Space Network (IDSN) antennas at Byalalu, near Bengaluru, it said. "Since its launch on July 22 all systems onboard Chandrayaan-2 spacecraft are performing normally," the ISRO said.

The spacecraft will approach the moon on August 20 and then the spacecraft's liquid engine will be fired again to insert it into lunar orbit, the ISRO said. "Following this, there will be four orbit maneuvers to make the spacecraft enter its final orbit, passing over the lunar poles at a distance of about 100 km from the moon's surface," it said.

In a giant leap for the country's ambitious low-cost space programme, ISRO's most powerful three-stage rocket GSLV-MkIII-M1 had launched the spacecraft into the orbit of the Earth on July 22 from the spaceport of Sriharikota, Andhra Pradesh. According to ISRO, after 13 days of Moon-bound orbit phase, the lander 'Vikram' carrying rover 'Pragyan' will separate and after another few days of orbiting will soft land on September 7 in the South Pole region of the Moon, where no country has gone so far, according to the ISRO.

If successful, the mission will make India the fourth country after Russia, the US and China to pull off a soft landing on the Moon. The orbiter carries eight scientific payloads for mapping the lunar surface and study the exosphere (outer atmosphere) of the Moon while the lander carries three scientific payloads to conduct surface and subsurface science experiments. The rover carries two payloads to enhance the understanding of the lunar surface. A passive experiment from NASA will also be carried onboard Chandrayaan-2, ISRO has said.

Following the landing, the rover will roll out from the lander and carry out experiments on the lunar surface for one lunar day, which is equal to 14 earth days. The mission life of the lander is also one lunar day, while the orbiter will continue its mission for a year.

According to the ISRO, the mission objective of Chandrayaan-2 is to develop and demonstrate the key technologies for end-to-end lunar mission capability, including soft-landing and roving on the lunar surface.

It also aims to further expand the knowledge about the moon through a detailed study of its topography, mineralogy, surface chemical composition, thermo-physical characteristics and atmosphere, leading to a better understanding of the origin and evolution of the moon, the space agency had said.