During the study period, the predominant variant was Delta and not Omicron 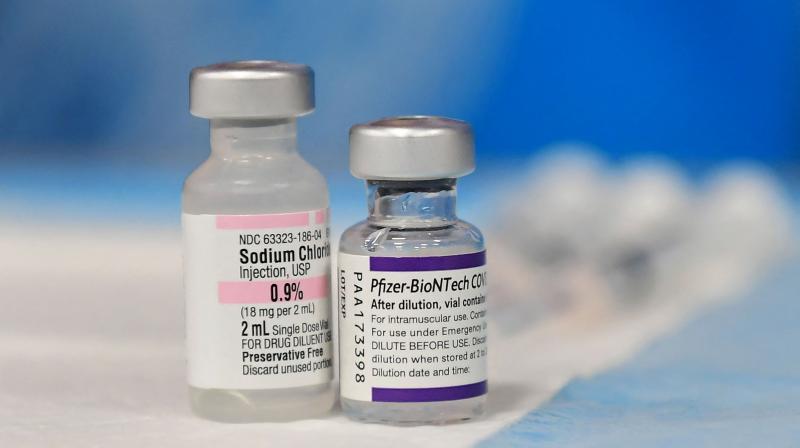 In this file photo taken on December 15, 2021, the Pfizer Covid-19 vaccine awaits administration at a vaccination clinic in Los Angeles, California. (Photo: AFP)

Washington: A third dose of the Pfizer COVID-19 vaccine conferred higher effectiveness against infection and hospitalisation than two doses of the preventive after one month, a study has found.

The study, published in The Lancet Regional Health-Americas, assessed the effectiveness of two doses of the Pfizer COVID-19 vaccination against infection, hospitalisation, and death up to eight months after vaccination.

The researchers also assessed the effectiveness of three doses of the vaccine up to three months after vaccination.

The study evaluated electronic health records of 3.1 million members of Kaiser Permanente in Southern California from December 2020 to December 2021.

"When we looked at the effectiveness of the two doses of PfizerBioNTech vaccine versus three doses, we see a benefit with three doses that exceeds that achieved with two doses alone," said Sara Y Tartof from Kaiser Permanente Southern California Department of Research & Evaluation, US.

During the study period, the predominant variant was Delta and not Omicron.

Two-dose vaccine effectiveness against infection declined from 85 per cent during the first month after vaccination to 49 per cent up to eight months following vaccination, the researchers said.

Two-dose vaccine effectiveness against hospitalisation remained 90 per cent throughout the eight months and did not wane, except among people who were 75 years of age and older, or who had compromised immune systems, they said.

For people who were immunocompromised, the protection against hospitalisation dropped to 74 per cent, and for those 75 and older, it was 77 per cent, according to the researchers.

"What we see from this research is that the public health impact of a third dose to prevent severe disease is substantial," Tartof said.