The solar-powered harvester, which can work in conditions as low as 20 per cent humidity 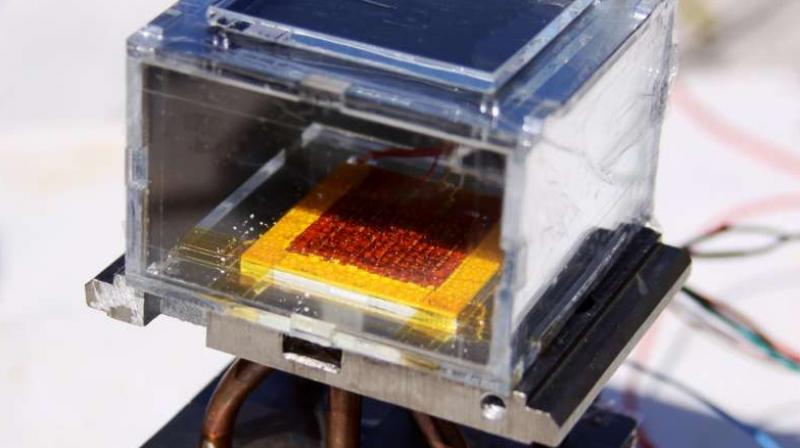 The new system consisted of dust-sized MOF crystals compressed between a solar absorber and a condenser plate, placed inside a chamber open to the air.

In a breakthrough, scientists have developed a new system that can harvest litres of water from the air everyday using just ambient sunlight, even in dry or desert climates.

The solar-powered harvester, which can work in conditions as low as 20 per cent humidity, was constructed at the Massachusetts Institute of Technology (MIT) in the US.

"This is a major breakthrough in the long-standing challenge of harvesting water from the air at low humidity," said Omar Yaghi, from the University of California, Berkeley.

"There is no other way to do that right now, except by using extra energy. Your electric dehumidifier at home 'produces' very expensive water," said Yaghi, also a faculty scientist at Lawrence Berkeley National Laboratory in the US.

The prototype, under conditions of 20-30 per cent humidity, was able to pull 2.8 litres of water from the air over a 12-hour period, using one kilogramme of a metal-organic framework (MOF) - a special material produced at UC Berkeley.

"One vision for the future is to have water off-grid, where you have a device at home running on ambient solar for delivering water that satisfies the needs of a household,"

"To me, that will be made possible because of this experiment. I call it personalised water," he said.

The new system consisted of dust-sized MOF crystals compressed between a solar absorber and a condenser plate, placed inside a chamber open to the air.

As ambient air diffuses through the porous MOF, water molecules preferentially attach to the interior surfaces.

Sunlight entering through a window heats up the MOF and drives the bound water toward the condenser, which is at the temperature of the outside air. The vapour condenses as liquid water and drips into a collector.

"This work offers a new way to harvest water from air that does not require high relative humidity conditions and is much more energy efficient than other existing technologies," Evelyn Wang, a mechanical engineer at MIT.

This proof of concept harvester leaves much room for improvement, Yaghi said. The current MOF can absorb only 20 per cent of its weight in water, but other MOF materials could possibly absorb 40 per cent or more.

The material can also be tweaked to be more effective at higher or lower humidity levels.

"To have water running all the time, you could design a system that absorbs the humidity during the night and evolves it during the day," Yaghi said.

“We wanted to demonstrate that if you are cut off somewhere in the desert, you could survive because of this device.” he said.

The study was published in the journal Science.