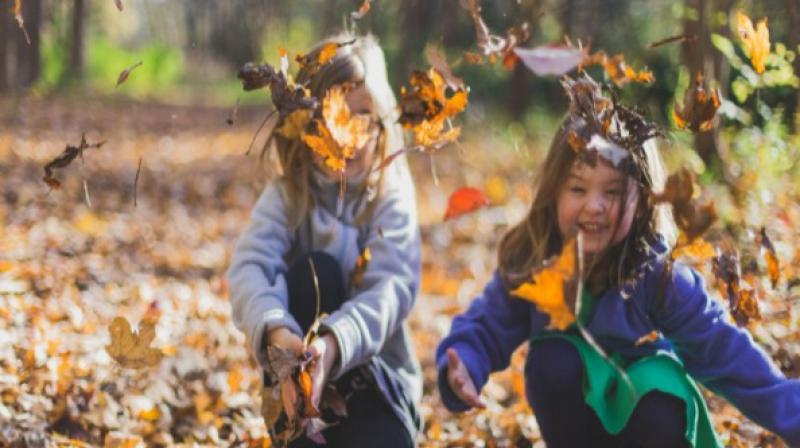 A study published in the journal 'People and Nature' has found that children who increased their connection to nature during the first COVID-19 lockdown were likely to have lower levels of behavioural and emotional problems. (Representative Photo:ANI)

Cambridge [UK]: A new study has suggested that children from less affluent backgrounds are likely to have found COVID-19 lockdowns more challenging to their mental health because they experienced a lower connection with nature than their wealthier peers.

A study published in the journal 'People and Nature' has found that children who increased their connection to nature during the first COVID-19 lockdown were likely to have lower levels of behavioural and emotional problems, compared to those whose connection to nature stayed the same or decreased - regardless of their socio-economic status.

The study, by researchers at the University of Cambridge and the University of Sussex, also found that children from affluent families tended to have increased their connection to nature during the pandemic more than their less affluent peers.

The results strengthen the case for nature as a low-cost method of mental health support for children and suggest that more effort should be made to support children in connecting with nature - both at home and at school.

The researchers' suggestions for achieving this include: reducing the number of structured extracurricular activities for children to allow for more time outside, provision of gardening projects in schools, and funding for schools, particularly in disadvantaged areas, to implement nature-based learning programmes.

The study also offers important guidance in relation to potential future restrictions during the COVID-19 pandemic. "We know that access to and engagement with nature is associated with wide-ranging benefits in children and adults, including lowering levels of anxiety and depression, and reducing stress," said Samantha Friedman, a researcher in the University of Cambridge's Centre for Family Research, first author of the study.

She added: "The COVID-19 lockdowns meant that children no longer had their normal school activities, routines and social interactions. The removal of these barriers gave us a novel context to look at how changes in connection with nature affected mental health.

"Connecting with nature may have helped buffer some UK children against the effects of the lockdown, but we found that children from less affluent families were less likely to have increased their connection to nature during that time."

An increased connection to nature was reflected in reports of children spending time gardening, playing in the garden or doing physical activities outdoors. This was commonly linked to having more time available for these activities during the lockdown. Conversely, according to parents, a decreased connection to nature was explained by an inability to access some natural spaces due to travel restrictions in place at the time.

"Connecting to nature may be an effective way of supporting children's wellbeing, particularly as children return to normal routines, such as school and extracurricular activities," said Dr Elian Fink, a Lecturer in Psychology at the University of Sussex who was also involved in the study.

She added: "Our findings could be helpful in redesigning lockdown rules should the UK need to return to these conditions in the future, and particularly to countries whose lockdown restrictions prevented children from accessing nature at all.

The study used an online survey to collect responses from 376 families in the UK, with children between three and seven years old, between April and July 2020. Over half of these families reported that their child's connection to nature increased during the first COVID-19 lockdown. The remaining parents whose children's connection to nature decreased or stayed the same during this period also reported that their children were experiencing greater wellbeing problems.

A widely-used, gold standard questionnaire was used as a measure of each child's mental health - assessing emotional problems such as unhappiness, worrying, anxiety and depression; and behavioural problems such as anger and hyperactivity.

"Mental health problems can manifest in different ways in different children. We found that a greater connection with nature was associated with reductions in both emotional and behavioural problems," said Fink.

She added: "In reality, the contrasting experiences of access to nature between different socio-economic groups maybe even starker than our study found because respondents to our online study were largely drawn from more affluent societal groups."

Parents with children between three and seven years old responded to the study survey with reference to one particular child. The researchers focused on this age group because they were likely to experience a lot of disruption due to the pandemic, and also have less understanding of what was happening.

"Our study revealed the wide range of ways that parents can help children get more connected to nature. This might be a bit daunting to some, but it doesn't have to be camping in the woods and foraging for food - it really can be as simple as going for a walk near your house or sitting outside for ten minutes a day," said Friedman.