According to AP, FDA, citing reports of heart complications, said the drugs pose a greater risk to patients than any potential benefits 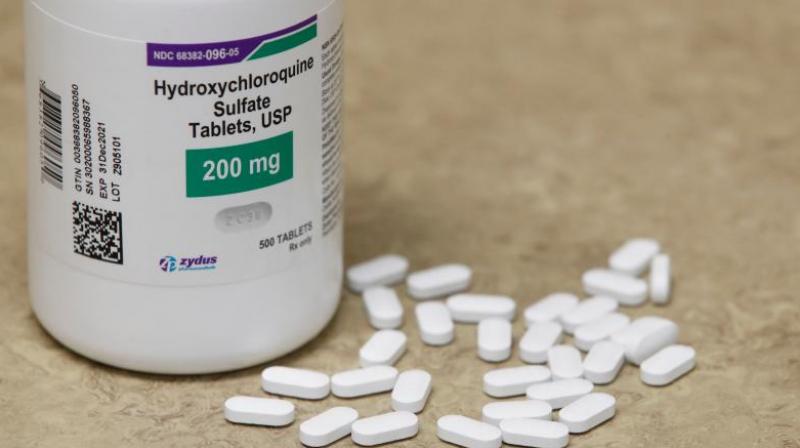 Washington: The US food and drug regulatory body on Monday withdrew the emergency use authorisation of anti-malarial drugs chloroquine and hydroxychloroquine in the treatment of COVID-19 patients after concluding that they may not be effective to cure the virus infections and lead to greater risks than any potential benefits.

The Food and Drug Administration's decision came weeks after President Donald Trump called hydroxychloroquine a "game-changer" drug in the fight against the COVID-19 in America, the world's worst-hit nation by the pandemic.

The Food and Drug Administration (FDA) said its decision is based on new information, including clinical trial data results, that have led it to conclude that the drugs may not be effective to treat COVID-19 and that its potential benefits for such use do not outweigh its known and potential risks.

According to AP, FDA, citing reports of heart complications, said the drugs pose a greater risk to patients than any potential benefits.

The drugs can cause heart rhythm problems, severely low blood pressure and muscle or nerve damage.

FDA chief scientist Denise Hinton, in a letter dated June 15 to Gary Disbrow of Biomedical Advanced Research and Development Authority (BARDA), said as of the date of this letter, the oral formulations of hydroxychloroquine (HCQ) and (chloroquine) CQ are no longer authorised by the FDA to treat COVID-19.

On March 28, FDA had issued emergency use authorization (EUA) for use of oral formulations of chloroquine phosphate (CQ) and hydroxychloroquine sulfate (HCQ) to be distributed from the Strategic National Stockpile (SNS).

Hinton said that FDA now believes that the suggested dosing regimens for CQ and HCQ are unlikely to produce an antiviral effect.

Earlier observations of decreased viral shedding with HCQ or CQ treatment have not been consistently replicated and recent data from a randomised controlled trial assessing probability of negative conversion showed no difference between HCQ and standard of care alone, he said.

Recent data from a large randomised controlled trial showed no evidence of benefit for mortality or other outcomes such as hospital length of stay or need for mechanical ventilation of HCQ treatment in hospitalised patients with COVID-19, the letter said.

Hinton said that while HCQ, that has been distributed from SNS, is no longer authorised under the EUA to treat hospitalised patients for COVID-19, FDA-approved HCQ can be distributed in interstate commerce.

At Trump's request, India in April allowed the export of 50 million HCQ tablets to treat COVID-19 patients in America.

Trump had on May 18 disclosed that he was taking hydroxychloroquine daily to ward off the deadly coronavirus.

Defending the drug, he had said that hydroxychloroquine was a "line of defence" against the coronavirus.

It is a very powerful drug I guess but it doesn't harm you and so I thought as a frontline defence, possibly it would be good, and I have had no impact from it," Trump had said, adding that the antimalaria drug has received tremendous reviews from doctors all over the world.

According to the Johns Hopkins University data, US has over 2.1 million COVID-19 cases with more than 115,000 deaths.