Water once flowed on 'cold and icy' ancient Mars: study

Scientists trying to understand what ancient Mars might have been like, the red planet sends some mixed signals. 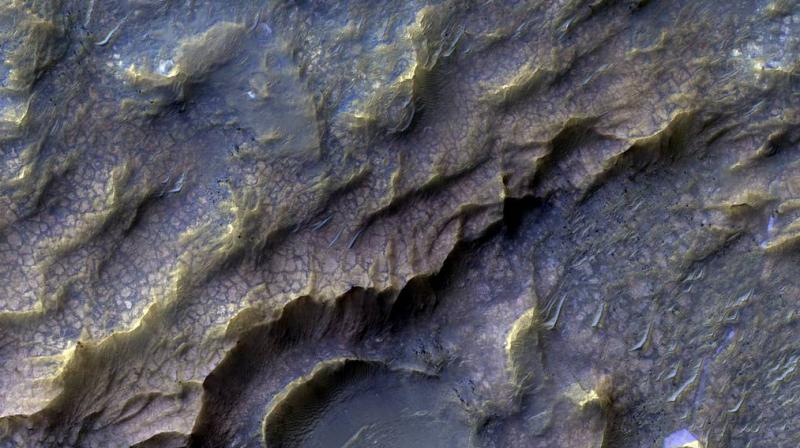 Water may have flowed on ancient Mars in peak summers, even though the red planet was generally frozen over, a study suggests.

While water-carved valleys and lakebeds leave little doubt that water once flowed on the surface, climate models for early Mars suggest average temperatures around the globe stayed well below freezing. The study led by scientists at Brown University in the US offers a potential bridge between the "warm and wet" story told by Martian geology and the "cold and icy" past suggested by atmospheric models.

The study, published in the journal Icarus, shows that it is plausible, even if Mars was generally frozen over, that peak daily temperatures in summer might sneak above freezing just enough to cause melting at the edges of glaciers. That meltwater, produced in relatively small amounts year after year, could have been enough to carve the features observed on the planet today, the researchers conclude.

"We see this in the Antarctic Dry Valleys, where seasonal temperature variation is sufficient to form and sustain lakes even though the mean annual temperature is well below freezing," said Ashley Palumbo, PhD student at Brown University.

"We wanted to see if something similar might be possible on ancient Mars," said Palumbo. The researchers started with a state-of-the-art climate model for Mars - one that assumes an ancient atmosphere composed largely of carbon dioxide as it is today.

The model generally produces a cold and icy early Mars, partly because the Sun's energy output is thought to have been much weaker early in solar system history. The researchers ran the model for a broad parameter space for variables that may have been important around four billion years ago when the iconic valley networks on the planet's southern highlands were formed.

While scientists generally agree that the Martian atmosphere was thicker in the past, it is not clear just how thick it actually was. Likewise, while most researchers agree that the atmosphere was mostly carbon dioxide, there may have been small amounts of other greenhouse gases present. Researchers ran the model with various plausible atmospheric thicknesses and extra amounts of greenhouse warming.

The model produced scenarios in which ice covered the region near the location of the valley networks. While the planet's mean annual temperature in those scenarios stayed well below freezing, the model produced peak summertime temperatures in the southern highlands that rose above freezing. The results offer a potential means of reconciling the

Geological evidence for flowing water on early Mars with the atmospheric evidence for a cold and icy planet, researchers said.