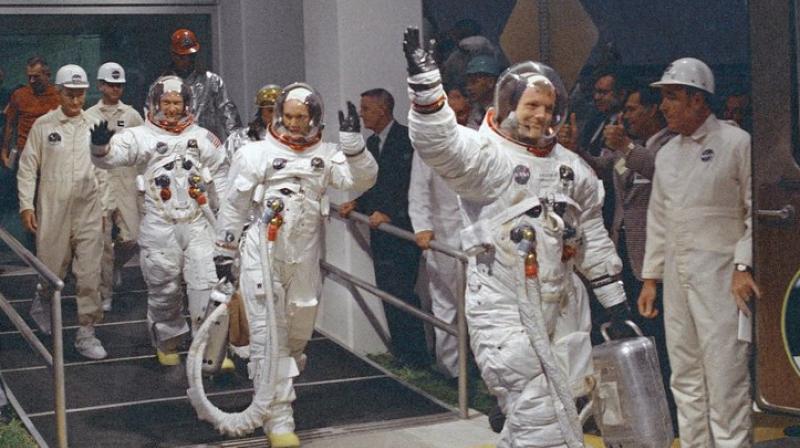 Among the more personal items to be auctioned are a Purdue University centennial flag from Armstrong’s alma mater that travelled on Apollo 11 and his Boy Scout cap. (Photo: AP)

Admirers of Neil Armstrong and space exploration have a chance to own artefacts and mementoes that belonged to the modest man who became a global hero by becoming the first human to walk on the moon.

The personal collection of Armstrong, who died in his native Ohio in 2012, will be offered for sale in a series of auctions handled by Dallas-based Heritage Auctions, beginning Nov. 1-2 and continuing in May and November 2019.

The collection includes a variety of artefacts from Armstrong’s 1969 lunar landing and private mementoes that include pieces of a wing and propeller from the 1903 Wright Brothers Flyer that the astronaut took with him to the moon.

Other items that went to the moon with Armstrong include a US flag, the largest size typically flown during Apollo missions; a United Nations flag; various state flags; and some Robbins Medallions. The sterling silver medallions were paid for by the crews of Apollo missions and were available for purchase only by NASA astronauts. Armstrong’s collection also includes a rare gold medallion.

Among the more personal items to be auctioned are a Purdue University centennial flag from Armstrong’s alma mater that travelled on Apollo 11 and his Boy Scout cap.

Armstrong’s son, Mark Armstrong, said his father never talked to him about what he wanted to be done with the large number of items he kept.

“I don’t think he spent much time thinking about it,” Armstrong said. “He did save all the items, so he obviously felt they were worth saving.”

Armstrong, who lives in suburban Cincinnati, said his father did keep all of his “flown” items together.

Faced with the responsibility of conserving, preserving and insuring irreplaceable items and honouring their father’s legacy, Armstrong and his brother, Rick, found that some things needed restoration and that some required research to be properly identified.

“We felt like the number of people that could help us identify them and give us the historical context was diminishing and that the problem of understanding that context would only get worse over time,” he said.

The Armstrongs turned to Sarasota, Florida-based Collectibles Authentication Guaranty for help with preserving and authenticating the artefacts and memorabilia and chose Heritage Auctions for the sales.

Greg Rohan, president of Heritage Auctions, said it handles numerous categories of collectables that appeal to various collectors, but items connected with space seem to have a universal appeal.

“Space is one of the very, very few categories that every single person seems to be interested in,” Rohan said. “You show somebody something from the space program, and they are fascinated by it.”

Bids can be taken online, by phone or in person.