Thirty-three children died Aug. 10 and 11 at the BRD Medical College in Gorakhpur, around the time there was a disruption in the oxygen supply. 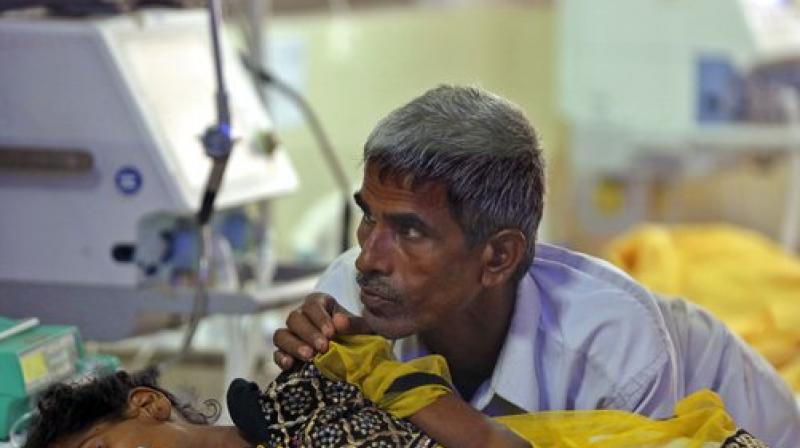 Dozens of children died last week in a decrepit government hospital in northeastern India, prompting public outcry over whether an oxygen shortage was to blame. Answers remain unclear, but doctors who have spent decades treating sick kids in the area say the incident is a symptom of a greater problem: Chronic mismanagement, corruption and outright negligence are worsening encephalitis outbreaks that sicken thousands of children every year.

Thirty-three children died Aug. 10 and 11 at the BRD Medical College in Gorakhpur, around the time there was a disruption in the oxygen supply. A team of experts sent from New Delhi concluded that the interruption was not responsible for the deaths, but that has failed to quell national fury in India over how the hospital allowed oxygen to run out. Prime Minister Narendra Modi even expressed sympathy to the children’s families this week during his Independence Day speech.

Doctors say they hope the national spotlight will force officials to focus on another hugely neglected problem: encephalitis, which has killed more than 4,000 children and sickened nearly 25,000 since 2010 in Uttar Pradesh, where the hospital is located. Some of the children who died had the brain-swelling condition.

Acute encephalitis syndrome is a catch-all term to describe patients suffering fever, vomiting, headaches and brain function issues such as confusion, trouble speaking and coma along with seizures. The condition can leave surviving children paralySed and mentally impaired.

Outbreaks can be timed every year to the monsoon rains that leave swaths of coffee-coloured flood waters standing in fields and licking at roadways in impoverished parts of the country’s major rice-growing region. Yet much about the disease remains a mystery or a matter of debate.

Though it’s not proven, Kushwaha suspects germs spread through fecal matter in dirty water may be related to the outbreaks, along with overall poor sanitation and improper toilet facilities and practices in the country’s most populous state. But he insists the root cause is empty government promises and neglect in an area where health infrastructure and funding are poor and medical understaffing is high.

“We are just treating the fire, but we are not doing anything to prevent the fire and extinguish the fire,” he said. “In India, the corruption is so rampant that it has become a normal routine.”

A lack of testing capabilities makes it impossible for doctors to diagnose the cause of many encephalitis cases. Often, children with other identifiable diseases get lumped into the category simply because the symptoms are similar, said Dr V. Ravi, of the National Institute of Mental Health and Neurosciences. He has been studying encephalitis for 30 years and is currently researching the problem with a grant from the US Centres for Disease Control and Prevention.

In the past three years, he has tested nearly 7,000 encephalitis patients in three Indian states and found that Japanese encephalitis and dengue fever, both spread by mosquitoes, along with scrub typhus, a bacterial infection spread by mites, account for about 40 percent of identifiable encephalitis causes. The rest remain a question.

Dengue fever has no specific treatment other than supportive care, and India has not approved a newly released vaccine. Scrub typhus can be treated effectively with a cheap antibiotic if caught early.

Japanese encephalitis has been wiped out in many Asian countries, but has plagued parts of India for decades, especially near the Nepal border in the northeast corner around Gorakhpur. It is closely related to West Nile virus and attacks the brain and spinal cord. It typically spreads from pigs to people via mosquitoes, is easily identified through testing and can be prevented by vaccination. It infects many people in childhood, but only a small percentage end up experiencing severe symptoms. Up to a third of those who are sickened develop problems ranging from paralysis to mental disabilities.

In 2005, thousands of children were rushed to the BRD Medical College with Japanese encephalitis, the same hospital at the center of the current oxygen scandal. Small sweaty bodies, some convulsing, others lying unconscious with their eyes rolled back in their heads, were packed two-to-a-bed in the large, open-air ward. Death was announced over and over again by the wailing howl of mothers collapsing on the filthy floor.

It was the largest outbreak in recent memory, ultimately killing more than 1,000 children around Gorakhpur.

All those deaths could have been prevented with a cheap vaccine that was eventually rolled out in mass campaigns and is now part of the routine schedule.

Coverage rates remain low in some areas, but the number of Japanese encephalitis deaths in Uttar Pradesh has fallen to double digits in recent years.

However, overall rates of the broader acute encephalitis syndrome have not changed. More than 3,000 cases are logged each year in the state that’s home to some 200 million people.

The monsoon rains have just started, and already more than 1,200 cases have been recorded along with 152 deaths. That number will climb until peaking in October.

“Hopefully, the government after this will wake up now and will start listening to us,” said Dr Ravi, the researcher, referring to the hospital oxygen shortage. “Hopefully, something will happen.”