There were 23,000 participants being assessed, who among them would be following two regimes of half dose and full dose 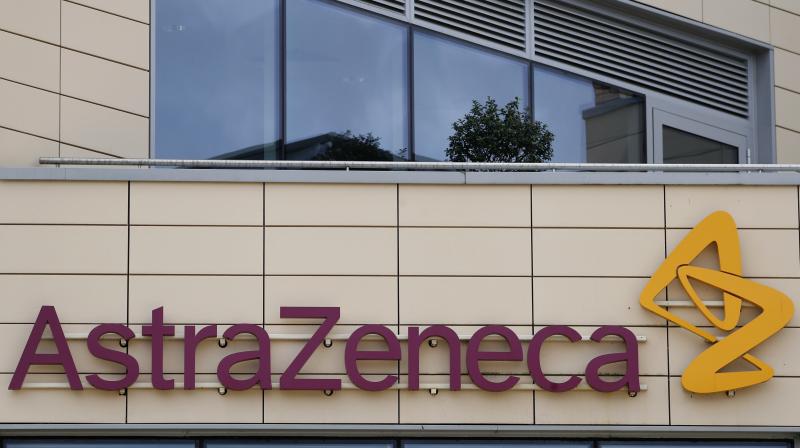 AstraZeneca offices and the corporate logo in Cambridge, England. AstraZeneca says late-stage trials of its COVID-19 vaccine were "highly effective'' in preventing disease. A vaccine developed by AstraZeneca and the University of Oxford prevented 70% of people from developing the coronavirus in late-stage trials, the team reported Monday Nov. 23, 2020.(AP)

LONDON: AstraZeneca said on Monday its COVID-19 vaccine could be around 90% effective, giving the world’s fight against the global pandemic a new weapon, cheaper to make, easier to distribute and faster to scale-up than rivals.

The British drugmaker said it will have as many as 200 million doses by the end of 2020, around four times as many as U.S. competitor Pfizer.

Seven hundred million doses could be ready globally as soon as the end of the first quarter of 2021.

“This means we have a vaccine for the world,” said Andrew Pollard, director of the Oxford University vaccine group that developed the drug.

The vaccine was 90% effective in preventing COVID-19 when it was administered as a half dose followed by a full dose at least a month later, according to data from late-stage trials in Britain and Brazil. No serious safety events were confirmed, the company said.

The vaccine’s cost to governments works out at just a few dollars a shot, a fraction of the price of shots from Pfizer and Moderna, which use a more unconventional technology.

It can also be transported and stored at normal fridge temperatures, which proponents say would make it easier to distribute, especially in poor countries, than Pfizer’s, which needs to be shipped and stored at -70C.

The faster roll-out means both rich and poor countries that had been drawing up plans to ration vaccines can distribute them more widely, helping to eventually halt the massive social and economic disruption of a pandemic that has killed 1.4 million people.

“The bulk of the vaccine rollout programme will be in January, February, March. And we hope that sometime after Easter things will be able to start to get back to normal,” said Matt Hancock, health secretary of Britain which has pre-ordered 100 million doses for its 67 million people.

In poor countries, where the logistics of distributing rival vaccines posed a bigger challenge, the effect of a cheaper and easier alternative could be even more pronounced. Zahid Maleque, health minister of Bangladesh, which is buying in 30 million doses of the AstraZeneca vaccine made in India, called the findings “really good news”.

“The big advantage of having the vaccine is that it can be stored, transported and handled at 2-8 degrees Celsius, and we have that storage facility,” he said.

“WE’LL BE A LOT HAPPIER”

The results showed the effectiveness of AstraZeneca’s vaccine depended on the dosing, and fell to just 62% when given as two full doses rather than a half-dose first.

Scientists cautioned, however, against seeing this as evidence that it would be less useful than rivals. Vaccines from Pfizer and Moderna each prevented about 95% of cases according to interim data from their late-stage trials.

The researchers did not say what proportion of the 131 cases of COVID-19 in the study received the smaller initial dose.

“I think it is a real fool’s errand to start trying to pick these three (Pfizer/Moderna/Astra) apart on the basis of snippets of phase 3 data from press releases,” said Danny Altmann, professor of immunology at Imperial College London.

“For the bigger picture, my suspicion is that by the time we are a year down the line, we’ll be using all three vaccines with about 90% protection - and we’ll be a lot happier.”

“There are some examples where changing the way you prime the immune system, can result in a better response,” Pollard said.

Pascal Soriot, Astra’s chief executive, said it was good news, as more people could be vaccinated faster with a limited supply.

Shares and oil prices rose amid hopes another vaccine candidate would revive the global economy with U.S. stock futures trading higher and the STOXX index of Europe’s 600 largest shares gaining 0.5% to its highest since February.

AstraZeneca’s own shares fell 1.8% as traders perceived the efficacy data as disappointing compared with rivals. Pfizer and Moderna set the bar for success sky-high. The U.S. Food and Drug Administration has said any shot would need to prevent disease or decrease severity in at least 50% of those vaccinated.

The AstraZeneca vaccine uses a modified version of a chimpanzee common cold virus to deliver instructions to cells to fight the target virus, a traditional approach to vaccine development and different from the path taken by Pfizer and Moderna, which rely on new technology known as messenger RNA (mRNA).

AstraZeneca, one of Britain’s most valuable listed companies, will now immediately prepare regulatory submission of the data to authorities around the world that have a framework in place for conditional or early approval.

It will also seek an emergency use listing from the World Health Organization to speed up availability in low-income countries. In parallel, the full analysis of the interim results is being submitted for publication in a peer-reviewed journal.

The U.S. Food and Drug Administration is likely to approve in mid-December the distribution of the vaccine made by Pfizer, according to a top official of the U.S. government’s vaccine development effort.

Covishield not to be taken by those allergic to its ingredients: Serum Institute