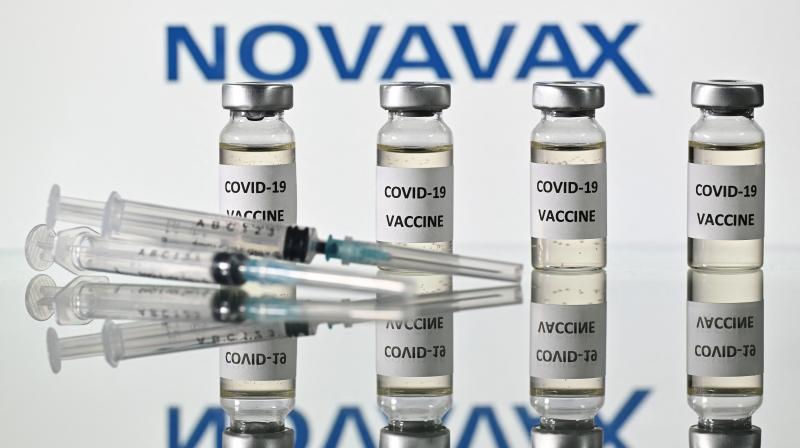 This file illustration picture shows vials with Covid-19 Vaccine stickers attached and syringes with the logo of US biotech company Novavax. (Photo: AFP)

Novavax's two-dose, protein-based vaccine was authorized for use this week by European Union regulators and the World Health Organization. It has previously been approved by countries including Indonesia and the Philippines but not the United States.

Novavax said that receiving an additional booster dose of Novavax's vaccine further increased people's immune response to Omicron. The data was taken from Novavax's ongoing studies of its vaccine's effectiveness in adolescents and as a booster.

"We are encouraged that boosted responses against all variants were comparable to those associated with high vaccine efficacy in our Phase 3 clinical trials,” said Gregory M. Glenn, Novavax's president of research and development.

Other COVID-19 vaccine manufacturers, including Pfizer Inc. and Moderna Inc., also increase immune responses to Omicron, early data from those companies has shown. Resistance in all cases is stronger in people who have received an additional booster dose.

Novavax is working on developing an Omicron-specific vaccine and said Wednesday it expects to begin manufacturing doses of the variant-specific shot in January.

The drugmaker will start shipping vaccines to the EU's 27 member states in January as part of its deal to supply up to 200 million doses.

The company will also begin shipments in early 2022 to COVAX, a vaccine distribution mechanism overseen by WHO that allocates COVID-19 shots to poorer countries. Novavax and its partner, Serum Institute of India, have agreed to send COVAX more than 1.1 billion doses of Novavax's vaccine.