Residents of Butte, Montana, say the snow goose deaths this fall were a wake-up call that raises broader questions about the Berkeley Pit. 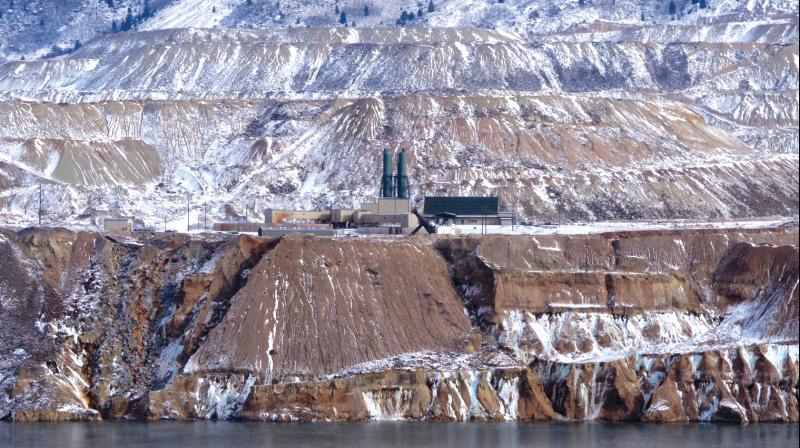 A file photo of the Horseshoe Bend Treatment Plant on the far shore of the Berkeley Pit in Butte, Montana. US officials plan to pump toxic water into the plant starting in 2023 to keep it below a critical level and prevent it from escaping the pit. (Photo: AP)

Butte, Montana: It was an unusual and unfortunate confluence of events: A larger-than-normal number of geese was making a later-than-normal migration over Montana when a snowstorm blew in at the wrong time and sent them soaring to the wrong place.

The throngs of white birds splashed down in a 50 billion-gallon toxic stew that is part of the nation’s largest Superfund site. At least 3,000 died.

Residents of this mining city say the snow goose deaths this fall were a wake-up call that raises broader questions about the Berkeley Pit and whether federal regulators will be ready when the former copper mine that collects heavily acidic, metal-laden water reaches capacity.

The Anaconda Copper Co. mined thousands of miles of tunnels under Butte over a century, finding gold, silver, lead, zinc, manganese and especially copper, and earning the city of 30,000 the nickname “The Richest Hill on Earth.” The old mine shafts started flooding when mining there ended in 1982, sending contaminated water into the Berkeley Pit. It’s been slowly filling up ever since.

The liquid is expected to reach a critical level in 2023, and environmental officials are finalising a plan for keeping it from contaminating Butte’s groundwater and a stream at the headwaters of the Columbia River basin. The critical level of 5,410 feet, set by the Montana Bureau of Mines and Geology as the lowest elevation in Butte’s drainage system, is the point at which water from the pit and flooded mines under the city could escape into other waterways. Fifty feet above that, the pit and mine water would enter the city’s groundwater.

The US Environmental Protection Agency; Atlantic Richfield, which bought Anaconda Copper in 1977; and Montana Resources, owner of an adjacent mine, negotiated a solution that relies on a water treatment plant built near the pit in 2000.

The Horseshoe Bend plant now treats more than four million gallons of water a day that would otherwise flow into the pit, and the plan is for it to treat another three million gallons a day directly from the pit starting in 2023. The plant has never handled seven million gallons at once, but EPA officials say there is enough time for a thorough review to ensure the contaminated water will never escape into the city’s Silver Bow Creek, whose banks have yet to be cleaned of the mine waste that was dumped there for decades.

“We’re going to really start digging into pilot studies and performance testing... to determine what kind of upgrades, what kind of redundancies do we need,” said EPA project manager Nikia Greene.

Atlantic Richfield and Montana Resources, which operates Horseshoe Bend, are confident the treatment plant will work as designed. Atlantic Richfield spokesman Brett Clanton said the plant received $1 million worth of upgrades in 2015, and additional improvements will begin by 2019.

Mark Thompson, Montana Resources’ environmental affairs manager, compared the plan to a sewage treatment plant that continuously discharges water that meets environmental standards. “It’s nothing to be worried about,” he said.

The recent mass goose deaths were an anomaly, he said, and activists’ attempt to tie them to a threat to Butte’s human population is “well overblown.”

But community activists worry the treatment-plant option is being favoured because it’s the cheapest technology, not necessarily the best.

They also suspect Atlantic Richfield will seek a waiver from the EPA allowing the company to discharge pit water into Silver Bow Creek that does not meet Montana’s clean water standards.

“When you think about the Berkeley pit water, whatever form that takes, it’s going to have to go through this one mile,” member Evan Barrett said of the creek running through the city. “I think the community understands this mile is critical to our future and also the future of the whole watershed.”

Greene acknowledged the EPA is studying a possible waiver of the state’s water quality standards, but said he could not elaborate because it is part of confidential negotiations with Atlantic Richfield.

“I’m very confident that whatever discharged water, however it’s treated, will not be allowed to be discharged if it affects Silver Bow Creek,” Greene said.

Perhaps the community’s biggest concern is that there is no strategy for the Berkeley Pit beyond keeping the water from reaching the critical level.

Daily and the Restore Our Creek coalition members said the plan only ensures that Butte will remain a Superfund site forever.

That would be unusual for a programme meant to permanently clean places polluted by hazardous pollutants — cleanups of nearly 400 sites across the nation have been completed and removed from the Superfund list as of December, according to the EPA.

The EPA’s Greene could not say whether Butte will always be a Superfund site, though he said there will always be some form of operation maintenance for the treatment plant plan.