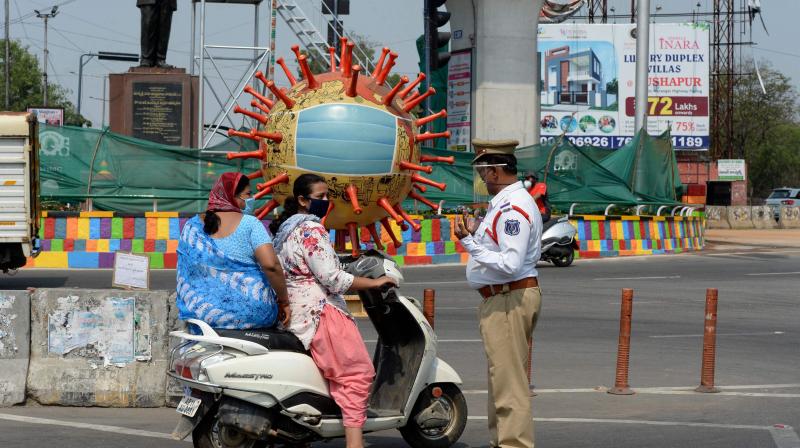 The analysis of samples from Maharashtra has revealed that compared to December 2020, there has been an increase in the fraction of samples with the E484Q and L452R mutations. — Representational image/PTI

New Delhi: Amid rising Covid-19 cases in the country, there is now a new cause of concern. A new "double mutant" variant of Covid-19 has been detected in several parts of India in addition to many other strains which have also been found abroad. Scientists of the Indian SARS-CoV-2 Consortium on Genomics (INSACOG) said in the new variant -- where two mutations, E484Q and L452R come together in the same virus -- is highly infectious and has the potential to skip immunity developed either by natural infection or vaccination.

Though the new strain has been found in about 15-20 per cent samples, Union health ministry officials said the new mutations have not been detected in sufficient numbers to establish direct relationship or explain the surge in cases in some states. Genomic sequencing and epidemiological studies are continuing to analyse the situation, they added.

Officials said the new "Indian strain" does not match any previously catalogued Variants of Concerns (VOC). “These have been categorized as VOCs but require the same epidemiological and public health response of increased testing, comprehensive tracking of close contacts, prompt isolation of positive cases and contacts as well as treatment as per National Treatment Protocol by the States/UTs,” Union health ministry said.

The analysis of samples from Maharashtra has revealed that compared to December 2020, there has been an increase in the fraction of samples with the E484Q and L452R mutations. From Kerala, 2,032 samples (from all 14 districts) have been sequenced. The N440K variant that is associated with "immune escape" has been found in 123 samples from 11 districts. This variant was earlier found in 33 per cent of samples from Andhra Pradesh, and in 53 of 104 samples from Telangana.

“This variant has also been reported from 16 other countries, including the UK, Denmark, Singapore, Japan and Australia. As of now these can at best be said to be variants under investigation," officials said.

NCDC director Dr S.K. Singh and NITI Aayog Members (Health) Dr V.K. Paul said in Maharashtra cases are being detected in places where there was less infection during the first wave. India on Wednesday recorded 47,262 new cases in 24 hours.

Union health secretary Rajesh Bhushan said Maharashtra and Punjab are of grave concern as they are reporting a very high number of cases in proportion to their population. Maharashtra reported the highest 28,699 cases in the last 24 hours followed by Punjab with 2,254 cases. Besides, Gujarat, Madhya Pradesh and Delhi too are reporting a sharp rise in cases. Lockdown has been imposed in Maharashtra’s Beed district while the Delhi government has banned all gatherings, including protests and religious crowding during festivals due to surge in cases.

Haryana too has banned public celebrations of Holi while the Uttar Pradesh government has issued guidelines urging senior citizens and vulnerable groups to stay away from celebrations and crowds. The Union home secretary has written to states to ensure stringent measures in crowd control, impose restrictions locally and intensify testing to detect and treat more cases.