The features were seen just outside the crater rim's crest above "Perseverance Valley," which is carved into the inner slope of the rim. 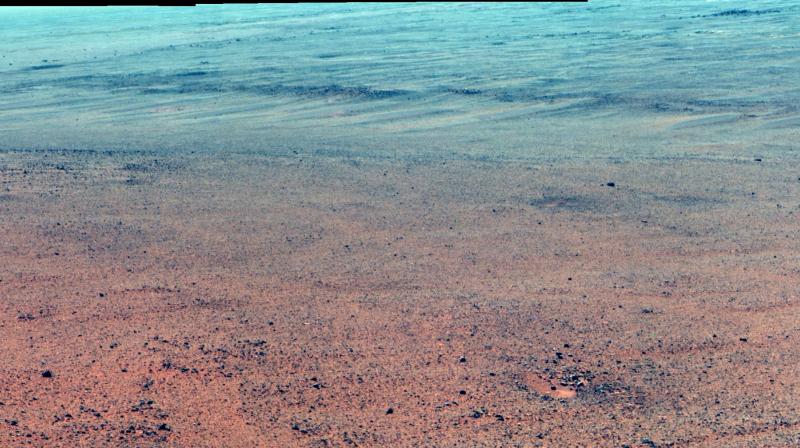 The Pancam on NASA's Mars Exploration Rover Opportunity took the component images of this enhanced-color scene during the mission's "walkabout" survey of an area just above the top of "Perseverance Valley," in preparation for driving down the valley. (Photo: NASA)

NASA's Opportunity Mars rover is examining the edge of a crater on the red planet that may once have been a lake of liquid water. The Opportunity rover found rocks at the edge of Endeavour Crater that were either transported by a flood or eroded in place by wind.

The features were seen just outside the crater rim's crest above "Perseverance Valley," which is carved into the inner slope of the rim.

Researchers plan to drive Opportunity down Perseverance Valley after completing a "walkabout" survey of the area above it.

The Opportunity mission has been investigating sites on and near the western rim of Endeavour Crater since 2011. The crater is about 22 kilometres across.

"The walkabout is designed to look at what's just above Perseverance Valley," said Ray Arvidson, from Washington University in St Louis.

"We see a pattern of striations running east-west outside the crest of the rim," said Arvidson, Deputy Principal Investigator of the Opportunity mission.

A portion of the crest at the top of Perseverance Valley has a broad notch. Just west of that, elongated patches of rocks line the sides of a slightly depressed, east-west swath of ground, which might have been a drainage channel billions of years ago.

"We want to determine whether these are in-place rocks or transported rocks," Arvidson said.

"One possibility is that this site was the end of a catchment where a lake was perched against the outside of the crater rim," he said.

"A flood might have brought in the rocks, breached the rim and overflowed into the crater, carving the valley down the inner side of the rim," he added.

"Another possibility is that the area was fractured by the impact that created Endeavour Crater, then rock dikes filled the fractures, and we're seeing effects of wind erosion on those filled fractures," Arvidson said.

In the hypothesis of a perched lake, the notch in the crest just above Perseverance Valley may have been a spillway.

Weighing against that hypothesis is an observation that the ground west of the crest slopes away, not toward the crater.

The science team is considering possible explanations for how the slope might have changed.

A variation of the impact-fracture hypothesis is that water rising from underground could have favoured the fractures as paths to the surface and contributed to weathering of the fracture-filling rocks.

The team is analysing images of Perseverance Valley, taken from the rim, to plot Opportunity's route.

The valley extends down from the crest into the crater at a slope of about 15 to 17 degrees for a distance of about two football fields.