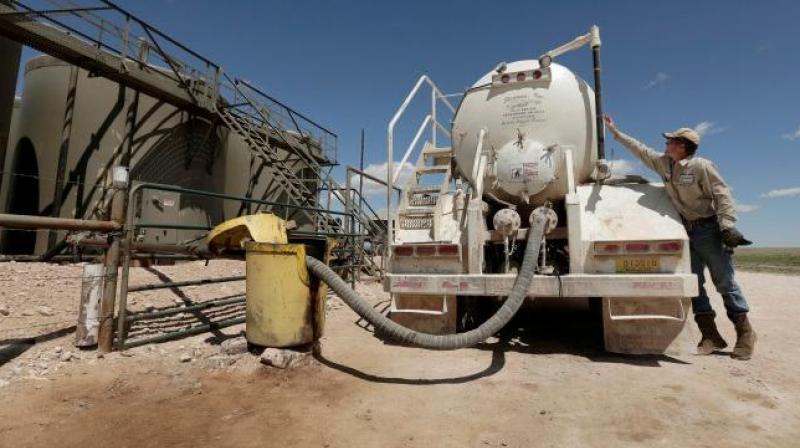 Researchers at the University of Colorado have found more evidence that an increase in earthquakes on the Colorado-New Mexico border since 2001 was caused by wells that inject wastewater from oil and gas production back underground. (Photo credit: AP)

Scientists say they have more evidence that an increase in earthquakes on the Colorado-New Mexico border since 2001 has been caused by wells that inject wastewater from oil and gas production back underground, similar to human-caused quakes in Oklahoma and other states.

A paper published last week by researchers at the University of Colorado concluded that the wastewater caused a big enough increase in underground pressure to make rock formations slip along fault lines. "You find that the pressure changes at a given depth are enough to trigger earthquakes," said Jenny Nakai, the paper's lead author and a doctoral student at the university.

The paper, published in the Journal of Geophysical Research: Solid Earth, is the latest to link wastewater injection wells to earthquakes. Most oil and gas wells produce at least some wastewater that is too salty to use, so regulators allow energy companies to pump it back underground to get rid of it. Researchers have linked earthquakes in Colorado, Kansas, New Mexico, Oklahoma and Texas to wastewater injection.

Oklahoma had only a few dozen earthquakes of magnitude-3.0 or greater in 2012 but had more than 900 in 2015. The number dropped to closer to 600 last year after state regulators directed energy companies to close some injection wells or reduce the volume of water they inject.

In the Raton Basin of northern New Mexico and southern Colorado, earthquakes began to increase in 2001, about two years after large-scale wastewater injection began, the US Geological Survey said. The wastewater comes from wells that extract natural gas from underground coal beds.

The biggest quake in the basin since 2001 was magnitude-5.3 in 2011. It caused minor damage to buildings in Trinidad, Colorado, about 15 miles from the epicentre. A 2014 paper by the Geological Survey blamed injection wells for the area's quakes. The new University of Colorado study went further, using computer models and records of wastewater injection to conclude that enough pressure built up to cause the quakes.

Justin Rubinstein, a geophysicist with the Geological Survey who was the lead author of the 2014 paper, said the computer models have been used in other locations but not in the Raton Basin before now. Rubinstein was not involved in the University of Colorado study and said he was not familiar with all its details but that the general conclusions made sense.

"It's consistent with what my research has shown," he said. The University of Colorado study also found that the Raton Basin earthquakes were more widespread than previously thought, said Nakai, the lead author.

The 2008-2010 data came from a temporary deployment of seismometers as part of two other research projects funded by the National Science Foundation, Nakai said.