New lander will add to humans’ long fascination with Mars

In our solar system family, Mars is Earth’s next-of-kin, the next-door relative that has captivated humans for millennia. 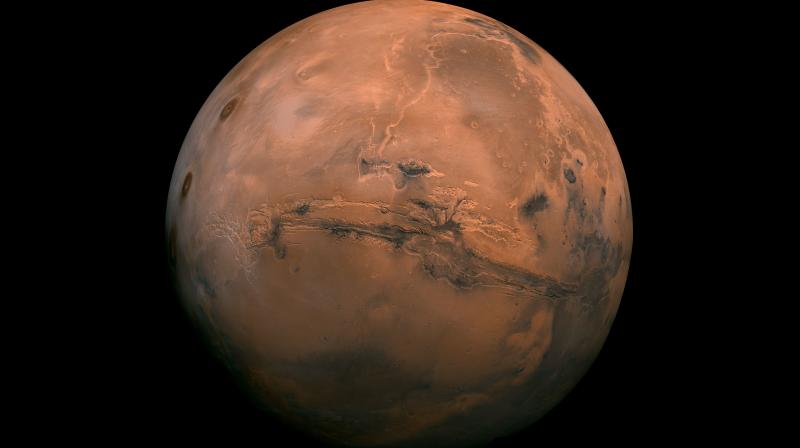 This image made available by NASA shows the planet Mars. This composite photo was created from over 100 images of Mars taken by Viking Orbiters in the 1970s. The attraction is sure to grow on Monday, November 26 with the arrival of a NASA lander named InSight. (NASA via AP, File)

In our solar system family, Mars is Earth’s next-of-kin, the next-door relative that has captivated humans for millennia. The attraction is sure to grow with Monday’s arrival of a NASA lander named InSight.

InSight should provide our best look yet at Mars’ deep interior, using a mechanical mole to tunnel 16 feet (5 meters) deep to measure internal heat, and a seismometer to register quakes, meteorite strikes and anything else that might start the red planet shaking.

Scientists consider Mars a tantalizing time capsule. It is less geologically active than the twice-as-big Earth and so retains much of its early history. By studying the preserved heart of Mars, InSight can teach us how our solar system’s rocky planets formed 4 1/2 billion years ago and why they turned out so different.

“Venus is hot enough to melt lead. Mercury has a sunbaked surface. Mars is pretty cold today. But Earth is a nice place to take a vacation, so we’d really like to know why one planet goes one way, another planet goes another way,” said InSight’s lead scientist Bruce Banerdt of NASA’s Jet Propulsion Laboratory in Pasadena, California.

Today’s Earthlings are lured to Mars for a variety of reasons. Mars — “an incredible natural laboratory” — is reasonably easy to get to, and the US, at least, has a proven track record there, noted Lori Glaze, NASA’s acting director of planetary science. The cherry on top is that Mars may have once been flush with water and could have harboured life.

“Trying to understand how life is — or was — distributed across our solar system is one of the major questions that we have,” Glaze said Wednesday at a news conference. “Are we alone? Were we alone sometime in the past?”

In two years, NASA will actually seek evidence of ancient microbial life on Mars — if, indeed, it’s there. On Monday, the space agency announced Jezero Crater as the landing site for the Mars 2020 rover, which will gather samples and stash them for a return to Earth in the early 2030s. The crater’s ancient lake and river system is brimming with diverse rocks, making it a potential hot spot for past life.

Repeat, past life. NOT present. Michael Meyer, NASA’s lead scientist for Mars exploration, said the Martian surface is too cold and dry, with too much radiation bombardment, for life to currently exist. Recorded observations of Mars — about double the size of Earth’s moon — date back to ancient Egypt. But it wasn’t until the 19th century that Mars mania truly set in.

Italian astronomer Giovanni Schiaparelli began mapping Mars in the 1870s and described the observed channels as “canali” — Italian for channels. But with the recently completed Suez Canal on many minds, “canali” became understood as artificial, alien-made canals.

Adding to the commotion, the U.S. astronomer behind the Lowell Observatory near Flagstaff, Arizona, Percival Lowell, decided the channels were transporting water from the poles for intelligent civilizations living near the equator.

Lowell’s musings influenced H.G. Wells, author of “The War of the Worlds” in 1898. The 1938 radio broadcast of the science-fiction novel terrified many Americans who thought Martians were actually invading. Ray Bradbury’s classic 1950 novel, “The Martian Chronicles,” kept up the Mars momentum.

Fast-forward to the 21st century, and SpaceX founder and science fiction enthusiast Elon Musk is leading a real-life charge to Mars. He envisions hundreds of thousands of people streaming to Mars in giant SpaceX ships and colonizing the red planet in order to continue the species.

Just this past week, Musk revealed new names for the interplanetary ships and booster rockets: Starship and Super Heavy. Musk is so passionate about Mars that he hopes to die there one day, although he stresses not on impact.

While NASA is holding out for its own Mars missions with crews, it has turned its more immediate attention back to the moon. An orbiting outpost near the moon could serve as an embarkation point for the lunar surface and even Mars, according to officials. It also would serve as a close-to-home proving ground before astronauts zoom 100 million miles to Mars.

All the observations and reports coming back from NASA’s robotic explorers at Mars will help the human Mars pioneers, according to Thomas Zurbuchen, chief of science missions for NASA. That’s the charm of Mars, according to scientists. Going to Mars is “a dream,” said the French Space Agency’s Philippe Laudet, project manager for InSight’s seismometer. “Everything is captivating.”