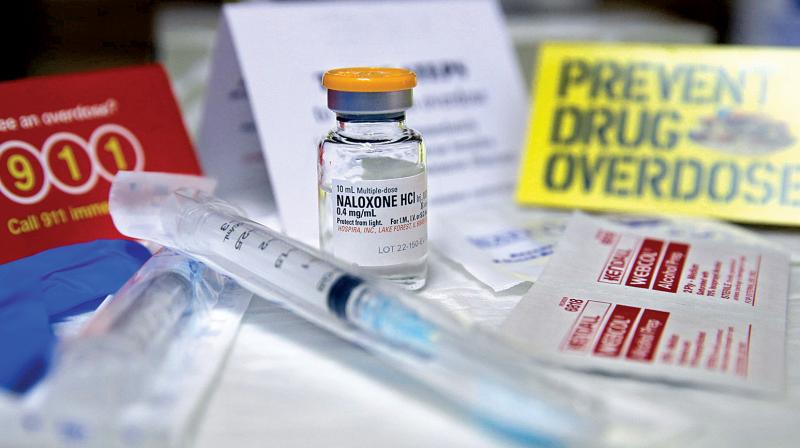 An overdose of opiates essentially makes the body forget to breathe. Naloxone works by blocking the brain receptors that opiates latch onto and helping the body ‘remember’ to take in air. (Photo: AP )

While drug and alcohol problems are associated with a higher risk of suicide among veterans, the increased danger is particularly high with opioid abuse, a US study suggests.

Overall, male veterans with drug or alcohol problems are more than twice as likely to die by suicide as other ex-service members, researchers report in the journal Addiction. For female veterans with substance use disorders, the odds of death from suicide are almost six times higher.

The suicide risk is particularly high when veterans misuse prescription sedatives, with more than quadrupled odds of suicide for men and more than 11 times the risk for women, the study also found. Among female veterans, opioids were also tied to a nearly eight-times-higher risk of suicide, while amphetamines and stimulants were tied to almost six times the risk.

“Previous studies have linked substance use disorders with an increased risk of suicide in both general population and Veteran samples; however, because suicide is a relatively rare outcome, prior studies have tended to group substance use disorders into broad categories”, said lead study author Kipling Bohnert of the VA Centre for Clinical Management Research and the University of Michigan in Ann Arbor.

For the study, researchers examined medical data and death records for more than 4.4 million veterans who received care through the Veterans Health Administration in 2004 and 2005. They followed veterans for six years.

At the start of the study, 8.3 per cent of men and 3.4 per cent of women had a substance use disorder.

For veterans with a substance use problem, the overall suicide rate was 75.6 cases per 100,000 person years. Men had a slightly higher rate of 76.1 cases, while women had a lower rate overall of 63.4 cases per 100,000 person-years. Two-thirds of the suicides involved firearms, and another one-quarter were by intentional poisoning, the study found.

After researchers accounted for veterans’ age and the severity of any medical conditions, the increased risk of suicide associated with substance abuse diminished somewhat but remained meaningful in most cases.

Once researchers also factored in mental health diagnoses, however, the findings changed. Differences between men and women diminished, and only alcohol and opioid misuse remained associated with an elevated suicide risk for female veterans.

One limitation of the study is that it only included VA patients, who tend to have poorer physical and mental health than other veterans, the authors note. Because the cause of death for suicides is often classified as an accidental overdose, it’s also possible that the study might have underestimated the odds of suicide for certain substance use disorders, the researchers point out.

“We knew that a diagnosis of a substance use disorder increased risk for suicide, but this paper illustrates that not all substance use disorders are the same”, said Rajeev Ramchand, a researcher in military mental health and suicide prevention at Rand Corporation who wasn’t involved in the study.

“There is an opiate crisis in America, including among our veterans, and this paper provides evidence that opiate addiction and suicide are strongly linked,” Ramchand said by email.

For veterans in particular, the transition from military to civilian life and problems with finances, housing, or spouses can be stressful circumstances that may make substance use or suicide attempts more likely, said Yu-Chu Shen, a researcher at the Naval Postgraduate School in Monterey, California, who wasn’t involved in the study.

“In addition, clinicians should be aware that deployments may increase suicide risk independently of underlying mental disorders, and so asking patients about deployment history is advisable”, Shen said by email. “Substance use disorder is not the only psychiatric condition associated with elevated risk of suicide — other psychiatric disorders and any previous attempts of suicide are major markers.”