Maxwell's arrival at the crease saw Australia adding 107 runs in the last 10 overs. 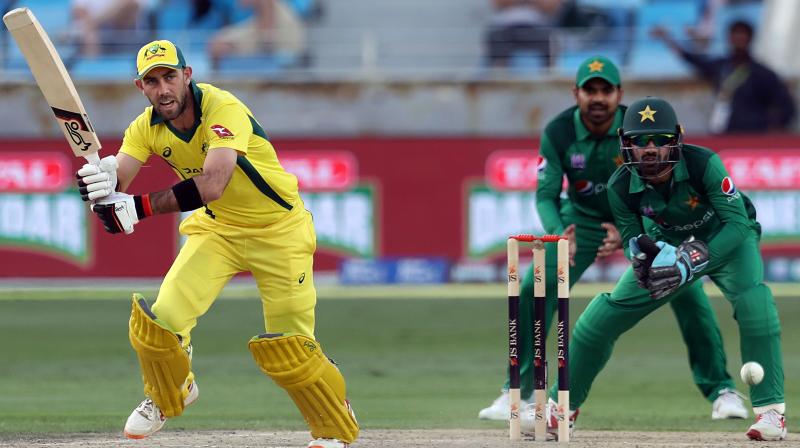 Maxwell raised his third successive half-century of the series and smashed Pakistan seamers at will with his extravagant shots on both sides of the wicket. (Photo: AFP)

Dubai: Australia swept new-look Pakistan 5-0 with a 20-run victory in a high-scoring fifth one-day international on Sunday. Glenn Maxwell's blistering 70 off 33 balls propelled Australia to its highest total in the series with 327-7 after Pakistan won the toss and chose to bowl in the final match. Pakistan, going into the series without seven of its likely World Cup players, put up a fight but was restricted to 307-7. "The way everyone contributed throughout the series was fantastic," Australian captain Aaron Finch said. "Everyone has played a really good role, so the selectors have a hard job to select that World Cup squad."

Haris Sohail (130) got his second century of the series and stand-in captain Imad Wasim hit an unbeaten 50 off 34 balls but Australia was always ahead with Jason Behrendorff claiming 3-63 and off spinners Maxwell (1-45) and Nathan Lyon (1-50) each bowling a decent 10 overs. "No matter what players are playing, 5-0 is a bad loss," Wasim said. "We have to chin up as we have a series coming up against England and then the World Cup. We also need to take initiative and play attacking cricket." Maxwell smashed 10 boundaries and three sixes after Usman Khawaja (98), Shaun Marsh (61) and captain Aaron Finch (53) had scored heavily upfront. Pakistan saw two World Cup pace contenders impress with Usman Shinwari grabbing 4-49 and Junaid Khan picking up 3-73.

Pakistan lost the previous match's century-makers Abid Ali for a duck and Mohammad Rizwan for 12 before Sohail and Umar Akmal (43) led the fightback with a 102-run fourth-wicket stand. But both batsmen fell in successive overs while looking for big hits. Akmal holed out in the deep off Lyon while Sohail, who hit 11 fours and three sixes, was caught at backward point in the 41st over.
Earlier, Finch and Khawaja continued their prolific run of form in the series when they shared a 134-run opening stand.

Finch scored back-to-back hundreds in the first two matches at Sharjah before failing by just 10 runs at Abu Dhabi to become the first Australian batsman to score three successive ODI centuries. Shinwari finally broke through when the left-arm fast bowler had Finch clean bowled but Khawaja batted solidly and added a further 80 runs with Marsh. However, Shinwari denied Khawaja a deserving century when the left-hander was caught at short mid-wicket. He hit 10 boundaries. Maxwell's arrival at the crease saw Australia adding 107 runs in the last 10 overs. Maxwell raised his third successive half-century of the series and smashed Pakistan seamers at will with his extravagant shots on both sides of the wicket. Australia rounded off its World Cup preparation tour with eight successive ODI victories. It won the series against India 3-2 despite losing the first two games.