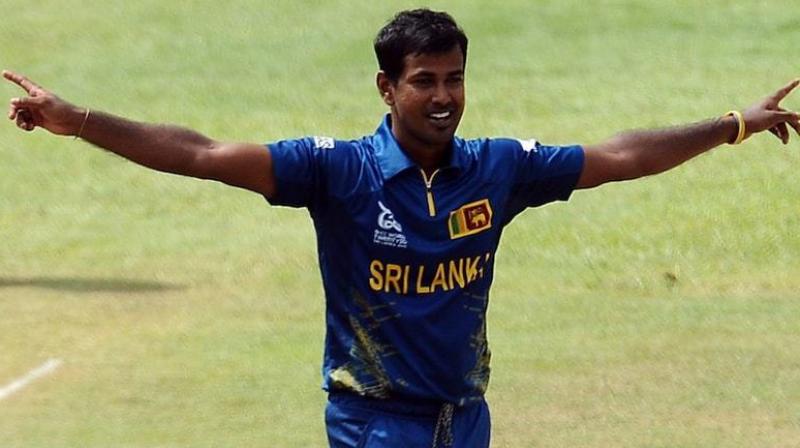 New Delhi: Sri Lanka Cricket (SLC) paid tribute to the recently retired bowler Nuwan Kulasekara for his contribution towards cricket in the team's final match in the three-match series against Bangladesh.

Lasith Malinga, who recently retired from ODI cricket was also the part of felicitation ceremony. Malinga played his last ODI on July 26 against Bangladesh. In his final match, Malinga scalped three wickets.

Sri Lanka Cricket (SLC) had earlier announced that they will be dedicating the final ODI of the ongoing three-match series between Sri Lanka and Bangladesh to recently retired bowler Kulasekara.

"Nuwan Kulasekara has been a vital cog in the Lankan lineup and played exceptional cricket during his time with the national team. His contributions made on the field brought in a lot of success for the national team. I wish him the best going forward," Shammi Silva, President of the SLC had said in an official statement.

Kulasekara was a vital part of the team in 2011. The side had made it to the World Cup finals in the year.

Kulasekara had announced retirement from international cricket on July 24.

The bowler was known for swinging the ball and he is the third-highest ODI wicket-taker for Sri Lanka only behind Chaminda Vaas and Lasith Malinga.

Kulasekara made his ODI debut against England in 2003. He played his last ODI against Zimbabwe at Hambantota in 2017. In 21 Test matches, he has 48 wickets under his name.

Sri Lanka defeated Bangladesh in the final ODI by 122 runs and as a result, they won the three-match series 3-0.