Vihari who resumed his innings from 42 runs on day two was not able to sleep properly before his ton. 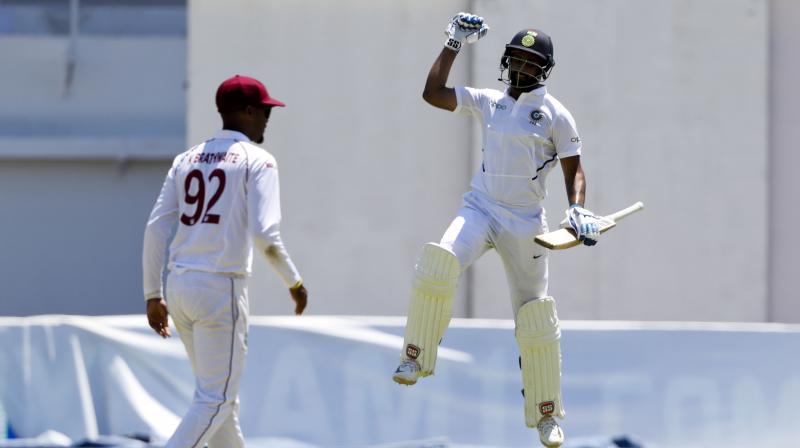 Hanuma Vihari scored 111 runs and helped India to post a total of 416 runs in the first innings. (Photo: AP)

Kingston: India batsman Hanuma Vihari who scored his maiden hundred against West Indies in the second Test, dedicated his ton to his late father.

"Actually, my dad passed away when I was 12 so ever since, I have decided that when I play international cricket I want to dedicate my first hundred to him. Today is an emotional day and I hope he is proud wherever he is and I'm really happy that I achieved that," Vihari told reporters here after the post-match conference.

Vihari who resumed his innings from 42 runs on day two was not able to sleep properly before his ton as he was thinking about how to covert his innings to hundred. Tailender Ishant Sharma stitched a 112-runs partnership with Vihari.

Sharma scored 57 runs and supported Vihari to get his maiden ton. Vihari scored 111 runs and helped India to post a total of 416 runs in the first innings.

"When I was batting overnight on 42, I did not sleep really well as my thoughts were obviously running on how to get a big score today. I'm happy that I could cross that three-figure mark and credit should go to Ishant as well -- the way he batted. I'm really happy that I could get my first hundred, especially in those conditions. It gives me a lot of satisfaction," Vihari said.

Looking for big shots, tailender Ishant (57) perished as he was sent back to the pavilion by Kraigg Brathwaite, and the 112-run partnership came to an end between Ishant and Vihari.

"I was batting at 84 during lunchtime, then it took me hard to get to the nineties. So, obviously I was patience, they bowled well after lunch. We have to give credit to the bowlers as well. Even though we scored 416 runs that do not show the way they bowled," Vihari said.

"I knew they would come hard in the first session because that's their best chance to get us out early. They did get a wicket early as Rishabh getting out on the first ball. I just wanted to bat patiently and wait for the balls which are in my area. That's what exactly I did and I'm happy that I stick to my game plan," he added.

Windies' innings got off to a bad start as Bumrah had John Campbell (2) caught at the hands of wicket-keeper Rishabh Pant with 10 runs on the board.

Bumrah wreaked havoc in the 9th over as he registered a hat-trick, and with this, he became only the third Indian after Harbhajan Singh and Irfan Pathan to achieve the feat in the longest format of the game.

"We bowled brilliantly, to be honest. The way Bumrah and all the other bowlers bowled, we stuck to our guns. Tomorrow we don't know what the game plan is.

So, the first thing will be to get them out as soon as possible. Then the management will decide whether we bat or bowl," Vihari said.

Pacer Jasprit Bumrah took a five-wicket haul on day two whereas West Indies finished day two at 87/7 after bundling India out for 416 runs in the first innings.