West Indies finished day two at 87/7 after bundling India out for 416 runs in the first innings. 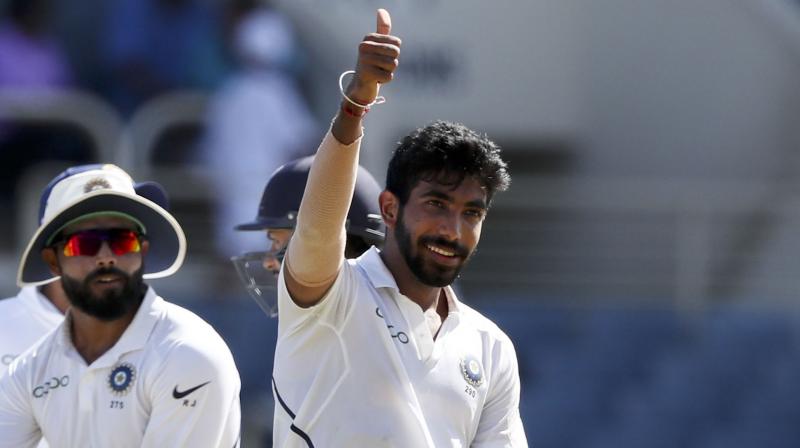 Bumrah wreaked havoc in the 9th over as he registered a hat-trick, and, with this, he became only the third Indian after Harbhajan Singh and Irfan Pathan to achieve the feat in the longest format of the game. (Photo: AP)

Kingston: Pacer Jasprit Bumrah took a six-wicket haul on day two of the second Test of the two-match series against West Indies to consolidate India's position here at Sabina Park.

West Indies finished day two at 87/7 after bundling India out for 416 runs in the first innings.

Windies' innings got off to a bad start as Bumrah had John Campbell (2) caught at the hands of wicket-keeper Rishabh Pant with just 10 runs on the board.

Bumrah wreaked havoc in the 9th over as he registered a hat-trick, and, with this, he became only the third Indian after Harbhajan Singh and Irfan Pathan to achieve the feat in the longest format of the game.

Bravo was sent back to the pavilion as Bumrah had him caught at the second slip. Brooks and Chase were caught plum in front and both were adjudged leg-before wicket.

Chase was originally given not-out but Kohli had opted for a review and the ball tracker showed that the ball was clearly hitting the stumps.

Opener Brathwaite was also sent back to the pavilion by Bumrah and with this the pacer scalped his fifth wicket in the innings, reducing Windies to 22/5. In the 15th over of the innings, Bumrah walked off the park as he felt pain in his left calf.
Skipper Jason Holder and Shimron Hetmyer retrieved the innings for Windies as they put up a 45-run stand, but their stint at the crease was ended by

Mohammad Shami as he rattled the stumps of Hetmyer (34) reducing Windies to 67/6.

With 20 minutes of play left on the second day, Kohli brought his strike bowler back into the attack and Bumrah did not disappoint as he dismissed Holder (18) in the 29th over of the innings.

Windies did not lose any more wicket and the team ended the day at 87/7, still trailing India by 329 runs.

Resuming day two at 264/5, India got off to the worst start possible as the side lost Pant (27) on the first ball of the day. Holder bowled an inswinger to dismantle the stumps of Pant.

All-rounder Ravindra Jadeja came to bat next and he provided support to the overnight batter Hanuma Vihari. The duo played cautiously and stitched a 38-run stand, but their resistance was cut short by Rahkeem Cornwall as he dismissed Jadeja (16) to reduce India to 302/7.

Holder had one decision going his way as the umpire ruled Vihari leg-before wicket, but the batsman reviewed the call, and the DRS saved him as the ball was clearly missing the stumps.

The team did not lose any more wicket and India went to the lunch break with a score of 336/7.

Looking for big shots, tailender Ishant (57) perished as he was sent back to the pavilion by Kraigg Brathwaite, and the 112-run partnership came to an end between Ishant and Vihari.