Previously, only Harbhajan Singh in 2001 and Irfan Pathan in 2006 were the ones to hold this distinguished record. 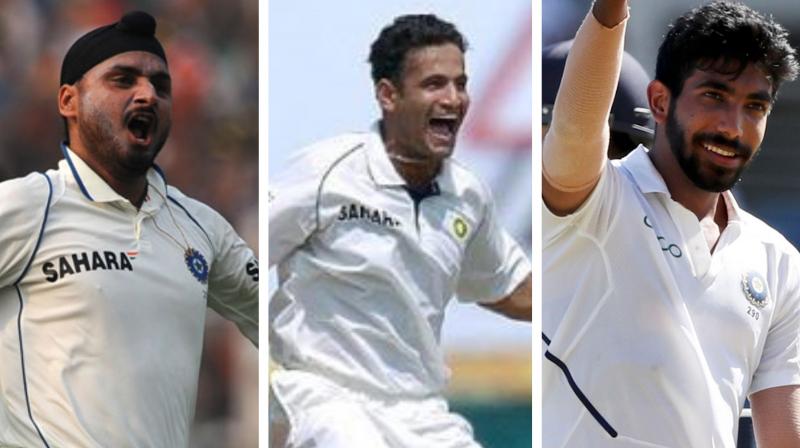 This hat-trick made Jasprit Bumrah just the third Indian to achieve this feat after Harbhajan Singh and Irfan Pathan. (Photo: AFP)

Mumbai: Indian pace-master, Jasprit Bumrah, recorded his first hat-trick in his international career on day two of the second Test of the two-match series between India and West Indies. This hat-trick made him just the third Indian to achieve this feat.

Previously, only Harbhajan Singh in 2001 and Irfan Pathan in 2006 were the ones to hold this distinguished record. Jasprit Bumrah has already proved his worth in ODIs and T20Is for India. Now, he is on his way of achieving invincibility in Test cricket as well.

India took on the formidable Australian side in Kolkata. Spearheading the bowling attack was Harbhajan Singh. He came in when Australia were cruising at 254/4 and took the important wickets of Ricky Ponting, Adam Gilchrist and Shane Warne.

India were on a tour of Pakistan and Irfan Pathan was soon going to have the best spell of his life. Pakistan were batting first and Irfan Pathan was handed the ball. He managed to take three wickets of Salma Butt, Younis Khan and Mohammad Yusuf with the first three balls of the match, thus reducing them of 0/3.

Bumrah dismissed Darren Dravo, Shamarh Brooks and Roston Chase in successive balls in the 9th over of the Windies innings. Bravo was sent back to the pavilion as Bumrah had him caught at the second slip. Brooks and Chase were caught plum in front and both were adjudged leg-before wicket.