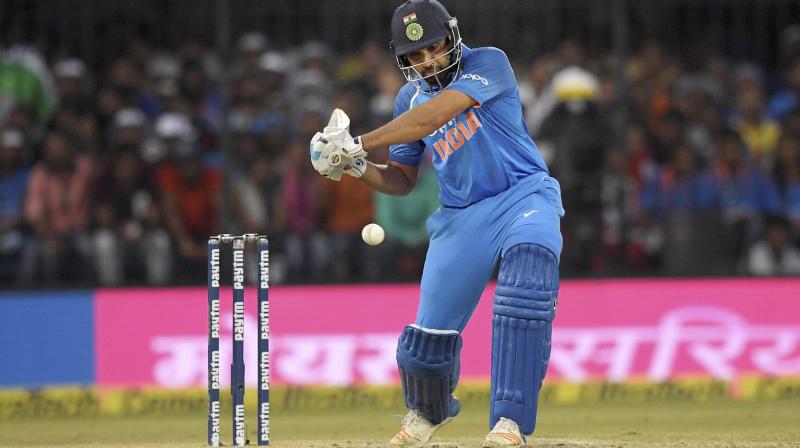 Nagpur:  Opener Rohit Sharma scored 125 runs as to help Team India secure 7 wicket win over Australia in the fifth and final ODI at the Vidarbha Cricket Association Stadium, Jamtha here on Sunday. This was Rohit's 14th ODI hundred .The victory also ensured that Virat Kohli's side clinched the ODI series 4-1.

India will now topple South Africa to occupy the No.1 spot in the ICC ODI rankings.

For Australia openers David Warner and Aaron Finch provided a solid start  with  66 run first wicket partnership. Warner top scored with 53 runs off 62 balls. Travis Head (42) and Marcus Stoinis (46) also contributed with the bat in the latter half of the innings as the visitors put up a challenging score of 242/9 in their full quota of 50 overs.

In reply openers, Ajinkya Rahane and Rohit Sharma made cautious start to their innings. Rohit took 14 balls to open his account in the run chase, but accelerated in the latter stages of the innings as he punished Australian bowlers to all the parts of the ground.

Nathan Coulter-Nile finally provided the breakthrough for Australia when he had Rahane LBW for 61 runs. Leg-spinner Adam Zampa also picked up two wickets. Zampa got rid of Rohit Sharma and skipper Virat Kohli, but it was too late for the away side to stage any kind of comeback as Team India completed a crushing victory over their opponent.

Wicket! Adam Zampa picks up second wicket in this over. India captain Virat Kohli dismissed for 39 runs after been caught at long on by Stoinis.

Rohit Shrma brought up his 14th ODI century as India close in on victory in the final ODI match in Nagpur. En-route to his century Rohit Sharma also reached 6000 runs in his carrier

Ajinkya Rahane departs , Coulter-Nile strikes for Australia. The first breakthrough for Australia. Rahane once again shuffling and trying to clip the ball off the pads but hits him on pad. The batsman ask for review but umpire decision remains  the same

India  in a very strong position after Ajinkya Rahane and Rohit Sharma completed their half centuries and also put up century stand.

Good start by Team India openers Ajinkya Rahane and Rohit Sharma. Rahane  is playing with confidence and striking the ball with ease,while Rohit Sharma is taking his time to to settle in and play his shorts.

Indian openers have made cautious start to their run chase with Rohit Sharma playing 14 dot balls to open his account with two boundaries of two consecutive delivery of Pat Cummins over.

WICKET! Two in two for Bhuvneshwar as he clean bowls  Nathan Coulternile who tries a big slog  only to see his stump uprooted.

WICKET!  James Faulker run-out, Slower ball wide outside off by Bhuvneshwar Kumar , Faulkner can only mis-time it to long-on, tries to run back for the second  to retain the strike  but was way short of the ground as Dhoni collects the ball and removes the bails.

WICKET! Jasprit Bumrah strikes, Matthew Wade departs. A low full toss ball from Bumrah, Wade tried to get underneath the ball only to slice the delivery straight into the hands of man on the sweeper cover boundary

Indian bowlers have pulled things back, especially Axar Patel, who picked up 3 wickets. Australia had Travis Head and Marcus Stoinis which put brakes on their innings.

WICKET! Jasprit Bumrah strikes for India, Marcus Stoinis trapped in front by the pacer. Bumrah bowls an in-cutter as stoinis goes for the flick but plays down the wrong line. The Australian goes for review,but the  tracker shows that ball will hit the middle stump. Stoinis departs for 46 runs.

WICKET!  It’s Axar Patel  provides the breakthrough yet again. Travis Head departs . The left arm spinner bowls a fuller length,Travis Head tries to go for sweep but  changes his short at the last moment only to see the ball crashing onto the stumps .

WICKET! Nothing's working for the Aussies. Handscomb attempts a sweep, but finds the top edge of the bat. Rahane takes a calm catch running back from slip

WICKET! Another one gone. Warner dances down the track and looks to chip a fullish delivery from Axar over mid-wicket. The opener finds Manish Pandey at long on, who takes an easy catch.

WICKET! Smith is trapped by Jadhav on an LBW decision. The Indian bowler bowls it straight and Smith attempts a sweep which he fails to connect. Easy decision for the umpire.

India have pulled back a few things with Finch dismissal (off Hardik Pandya) and  Kuldeep Yadav’s tight bowling is making sure Australia don’t get any easy runs.

WICKET! A breakthrough for India. It’s that man Hardik Pandya again. Aaron Finch departs. Jasprit Bumrah had almost dropped that catch but to India’s good fortune he managed to hold onto it while taking a tumble.

David Warner and Aaron Finch have started to their open their shoulders after being watchful in the first two overs. Bhuvneshwar Kumar and Jasprit Bumrah have not done much wrong but Finch and Warner have been solid.

Steve Smith has won the toss and Australia have elected to bat in the fifth and final ODI against India here at the Vidarbha Cricket Association Stadium, Jamtha on Sunday.

Australia win the toss and elect to bat first in the fifth and final @Paytm ODI #INDvAUS pic.twitter.com/5bhctFOpBF

India have made three changes to their side while Australia have made one change to their winning combination from the Bengaluru ODI.

Australia have recalled James Faulkner to the team as he replaces unwell Kane Richardson.

Here's the pitch at the VCA Stadium. Win the toss and...? #INDvAUS pic.twitter.com/0xBJG8TVJS

Both the captains, like it happened in the last game, said that they would wanted to bat first and like the last time, it was Steve Smith who got the result of toss in his favour.

"We are going to have a bat. It looks pretty dry, hopefully it would slow on as the game goes by and we can post a good total," said Smith.

Kohli, meanwhile, said, "The pitch looks very hard, we would've batted first as well but it shouldn't change much through the game. It is a relaid surface so there wouldn't be much of wear and tear. The last time we played here we chased down 350, so happy memories of the ground for us."

Team India will aim to cap off another bilateral series in style as the lock horns with Australia in Nagpur.

Having already given away the series to the hosts, failing to put up any fight in the first 3 ODIs, Steve Smith’s men showed what they are capable of in the 4th ODI by shocking India to end their 9-match winning streak.

However what remains to be seen today is whether the visitors can still pose that threat they are known for. In the previous contest, the Australian middle order and openers showed solidity, while the bowlers also made an impact.

On the other hand, the Men in Blue will put their bench depth to test once again. The pace duo of Mohammed Shami and Umesh Yadav will aim to not leak too many runs while the Indian spin duo of Axar and Chahal hope for good fortunes.

India toppled South Africa in ODI rankings to become the no.1 team and a loss once again might drag them back to the second place. The visitors meanwhile will aim to restore pride, having looked toothless so far.