Prithvi Shaw and PV SIndhu to train together: Report

The report states that Shaw’s team is working on a schedule for the youngster to train with Sindhu. 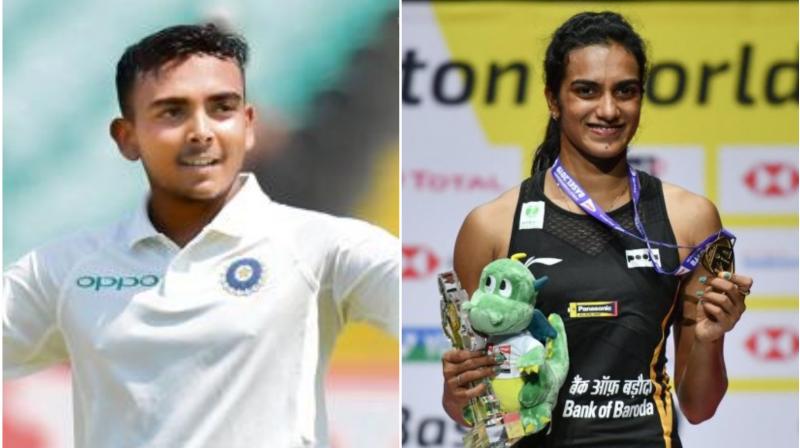 Prithvi Shaw, who is facing a ban for a doping violation, is all set to train with ace Indian shuttler PV Sindhu in Hyderabad. (Photo: AFP)

Mumbai: Prithvi Shaw, who is facing a ban for a doping violation, is all set to train with ace Indian shuttler PV Sindhu in Hyderabad, according to a report in The Hindu. The report states that Shaw’s team is working on a schedule for the youngster to train with Sindhu. The training will be focussed on his footwork and work ethics.

Before her win at the World Championships 2019, Sindhu had started training with strength trainer Srikanth Verma Madapalli, who put her under rigorous training sessions which ultimately brought out splendid results.

Prithvi Shaw’s doping violation was a result of him consuming a banned substance. His ban will continue up to November 15. Earlier, he was supposed to receive an 8-month ban, but the Board was satisfied by his explanation and he got away with a light punishment.

His start to Test career was impressive as he managed to score a century on his debut against West Indies last year. He had replaced Murali Vijay for the series and he ended up with 237 runs throughout the series and a Player of the Series award.

After that, it has been a string of bad luck for him. He was selected for the Australia tour, but an ankle injury forced him out of the series. When he recovered from his injury, he was slapped with a ban, thereby lengthening his time away from international cricket.