Earlier, Colin Ingram and Andre Fletcher launched a blistering attack for Pakhtoons that looked like they were gunning for a huge score. 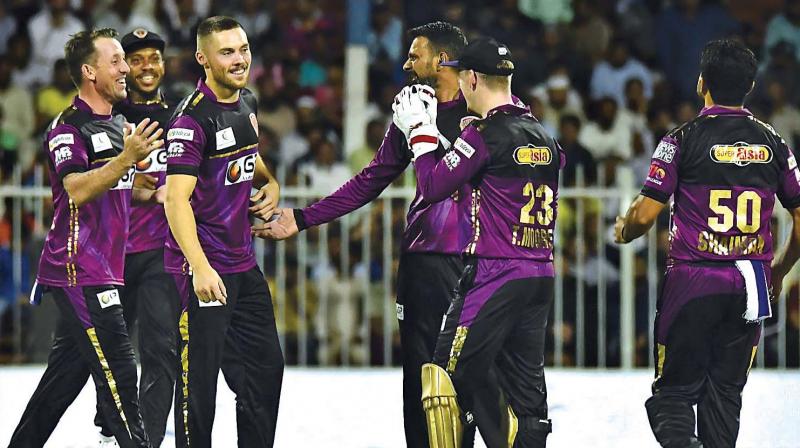 Punjabi Legends celebrate their win over Pakhtoons in their T10 league match at Sharjah.

Sharjah: Umar Akmal hit a brilliant 41 off 21 balls that included four sixes and three fours to make Punjabi Legends’ fightback look so easy that they won by five wickets with seven balls to spare against the favourites Pakhtoons in the 21st match of the second season of the T10 League at the Sharjah Cricket Stadium here.

Akmal batted all along with a cool head while wickets continued to fall on the other side of the crease and in the end, helped his team win easily to seal the fourth position in the points table with six points from six encounters so far.

Sohail Khan and Liam Dawson claimed two wickets each to try and restrict the Punjabi Legends and at one point of time, appeared to have been successful. However, it was Akmal who stood between the two teams and ensure Punjabi Legends have the last laugh.

Earlier, Colin Ingram and Andre Fletcher launched a blistering attack for Pakhtoons that looked like they were gunning for a huge score. However, Punjabi Legends bowlers put a brake in their boundaries.