The Supreme Court removed Anurag Thakur and Ajay Shirke from the posts of BCCI president and secretary respectively. 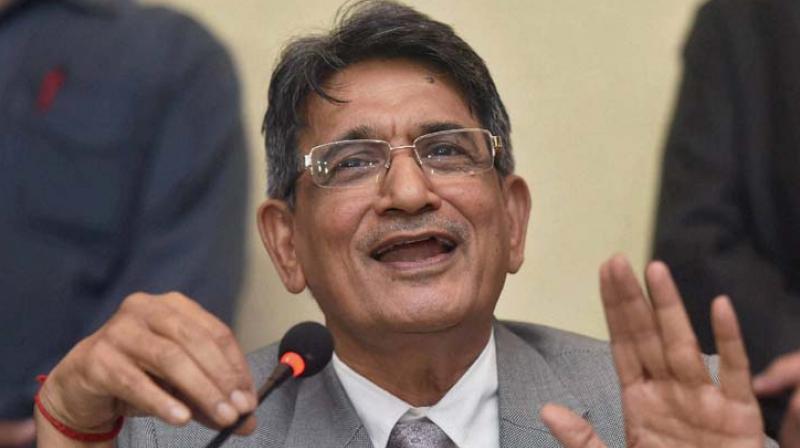 "I don't know whether they (BCCI) were overconfident or not, but one should understand that when the order of the Supreme Court, which is the higher court of the land, has come it has to be obeyed by all," said Justice (Retd.) RM Lodha. (Photo: PTI)

New Delhi: Justice (Retd.) RM Lodha on Monday welcomed the Supreme Court's decision to sack Anurag Thakur as the BCCI chief, saying it is the victory for the sport.

He said administrators come and go, but the decision is for benefit of the game.

The Supreme Court on Monday finally cracked the whip on BCCI president Anurag Thakur and secretary Ajay Shirke by removing them from their respective posts for their failure to bring transparency and accountability to the Indian cricket board and their non-compliance of the court's July 18, 2016 order.

The apex court also sought a reply from Thakur regarding perjury charges levelled against him by amicus curiae Gopal Subramaniam.

"This is logical consequences because once the committee's reforms were accepted by the Supreme Court in its order of July 18, 2016. It had to be implemented. There were obstructions, there were infringements, we fixed the timelines that was not adhered to, submitted three reports before the Supreme Court even then it was not implemented, obviously this was to happen," Justice (Retd.) Lodha told the reporters.

"I don't know whether they (BCCI) were overconfident or not, but one should understand that when the order of the Supreme Court, which is the higher court of the land, has come it has to be obeyed by all. It is the law of the land nobody could escape it. The majesty of the law has worth. Being at the helm of affairs, if they were not being able to implement the Supreme Court order, these consequences were bound to follow in and that is what had happened. Actually it is the victory of the game of the cricket and that it is going to flourish. Administrators come, administrators go. But ultimately it is for the benefit of the game. And game will flourish I am very sure," he added.

Justice (Retd.) Lodha further said the sacking of Thakur and Shirke is the first step towards implementation of the July 18, 2016, order.

"It was only by July 18 that committee was revived as we were asked to implement the order, accordingly we fixed the timelines but still we were unsuccessful. The order of the Supreme Court remained unimplemented and it is for this reason. I think this is the first step towards the implementation of the order of the July 18th, 2016," he added.

On December 15, the top court had observed that Thakur prima facie appears to have committed matter of perjury in relation to demanding an intervention via a letter from the International Cricket Council (ICC) in order to sidestep the implementation of the Lodha Committee recommendations.

Earlier in a landmark judgement on July 18, the Supreme Court accepted major recommendations of Justice Lodha-led panel on structural reforms in the BCCI and had given six months deadline to the board implement the recommendations.

On October 1, the board had accepted many of the "significant recommendations" of the Lodha Committee, but excluded the important ones which have been a bone of contention between the cricket body and the Lodha Panel.