BCCI can do better under judges, says Anurag Thakur after SC axe

Anurag Thakur asserted that it was not a personal battle for him but a battle for the autonomy of the sports body. 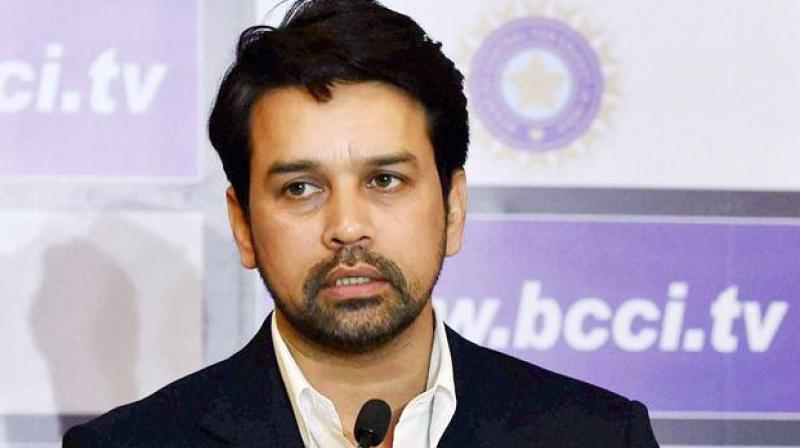 The apex court also sought a reply from Thakur regarding perjury charges levelled against him by amicus curiae Gopal Subramaniam. (Photo: PTI)

New Delhi: Hours after being sacked from the position of Board of Control for Cricket in India's (BCCI) chief by the Supreme Court, Anurag Thakur on Monday asserted that it was not a personal battle for him but a battle for the autonomy of the sports body.

"I had the honour of serving Indian cricket. Over the years, Indian cricket saw its very best in terms of administration and development of the game. BCCI is the best managed sports organisation in the country with defined procedures. India has the best cricketing infrastructure, built and maintained by the state associations with the help of BCCI," Thakur told ANI.

"India has more quality players than anywhere in the world. For me, it was not a personal battle. It was a battle for the autonomy of the sports body. I respect Supreme Court as any citizen should. Supreme Court judges feel that BCCI could better under retired judges. I wish them all the best. I am sure Indian cricket will do well under their guidance. My commitment to the best of Indian cricket and autonomy of sports will always remain," he added.

The apex court earlier in the day finally cracked the whip on Thakur and BCCI secretary Ajay Shirke by removing them from their respective posts for their failure to bring transparency and accountability to the Indian cricket board and their non-compliance of the court's July 18, 2016 order.

A bench, headed by Chief Justice TS Thakur, also issued notice to Thakur seeking an explanation why contempt proceedings should not be initiated against him.

The apex court also sought a reply from Thakur regarding perjury charges levelled against him by amicus curiae Gopal Subramaniam.

The apex court said all office bearers of the BCCI and state associations who refuse to abide by recommendations of Lodha panel to bring transparency and accountability in the cricket body shall demit office forthwith.

Stating that a committee of administrators will look after the affairs of BCCI, the apex court asked senior advocates Fali Nariman and Subramaniam to assist in nominating persons for the committee.

The apex court said the advocates will complete the task in two weeks and the matter will be taken up on January 19.

On December 15, the top court had observed that Thakur prima facie appears to have committed matter of perjury in relation to demanding an intervention via a letter from the International Cricket Council (ICC) in order to sidestep the implementation of the Lodha Committee recommendations.

Earlier in a landmark judgment on July 18, the Supreme Court accepted major recommendations of Justice Lodha-led panel on structural reforms in the BCCI and had given six months deadline to the board implement the recommendations.

On October 1, the board had accepted many of the "significant recommendations" of the Lodha Committee, but excluded the important ones which have been a bone of contention between the cricket body and the Lodha Panel.