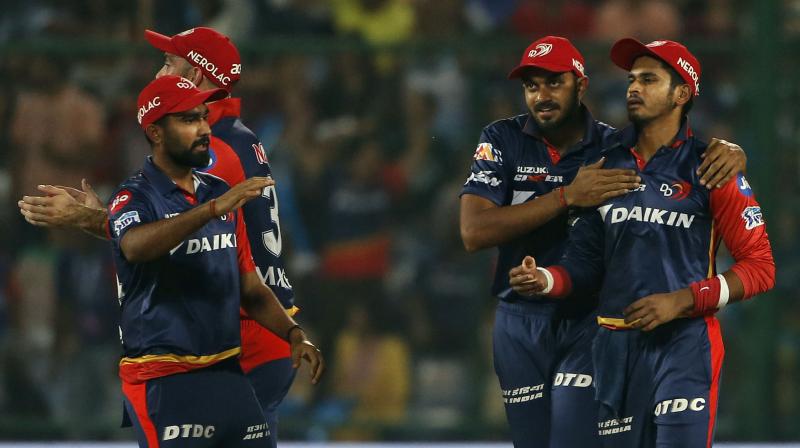 New Delhi: Start of play at the Feroz Shah Kotla has been delayed due to rain.

DD are looking for a comeback win after suffering a defeat to MS Dhoni's CSK at Pune.

Rajasthan Royals have won the toss and have elected to field in their IPL match against Delhi Daredevils.

For RR, D' Arcy Short has come in for Ish Sodhi, whereas Shreyas Gopal also makes the cut.

Meanwhile, hosts DD have also made one change, as Rahul Tewatia makes way for Shahbaz Nadeem.

Here's the playing XI for both teams:

Shreyas Iyer-led Delhi Daredevils (DD) will look for a turnaround in the ongoing Indian Premier League (IPL) when they take on Ajinkya Rahane’s Rajasthan Royals (RR) at the Feroz Shah Kotla here on Wednesday.

In their last encounter at the Sawai Man Singh Stadium in Jaipur, it was the hosts who prevailed over DD by 10 runs, winning via the Duckworth-Lewis method.

DD are coming into this match from a 13-run loss to Chennai Super Kings (CSK) at Pune and will hope not to concede more than 200 runs, the main reason they lost the match.

Rishab Pant (79) and Vijay Shankar (54) were the key performers for the bottom-placed team against CSK, but their efforts went in vain as they continued to slump in form.

In his first match as DD captain, Shreyas Iyer’s (93 runs) heroics, had led the team to 219-4 against Kolkata Knight Riders (KKR), and they successfully defended the total by restricting KKR to 164-9 from 20 overs.

RR, meanwhile, suffered a similar fate in their last match, having fallen short by 11 runs to Sunrisers Hyderabad (SRH) at their own home turf on Sunday.

The key players for RR will be Sanju Samson, who has been in top form this season and captain Rahane, who played an innings of 65 against SRH.

Jofra Archer will be another x-factor in RR’s setup if the visitors are to once again upset the last-placed team.

The match is scheduled to start at 8 P.M. IST on Wednesday (May 2nd).

The match will take place at the Feroz Shah Kotla in New Delhi.